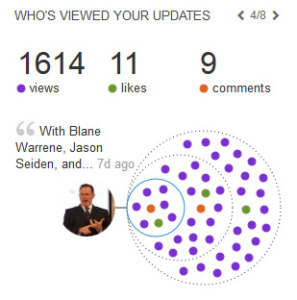 Updated December 2018 So I'm having an early morning breakfast at a hotel where I'm speaking that day for a group of financial advisers.  I strike up a conversation with the guy sitting at the next table.  And it turns out that he is attending the conference. He shares that he's been in the business for 20 years and has been pretty successful, but he actually came to the meeting to hear me speak about social media and LinkedIn, because he "...just doesn't get it.  Why should I post what I'm doing?  Who cares about that?  Isn't it just people talking about what they had for lunch?" Create Visibility in a "Noisy" World After explaining … END_OF_DOCUMENT_TOKEN_TO_BE_REPLACED