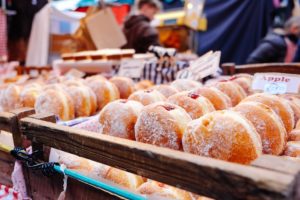 I really love doughnuts.  And donuts, too.

But no matter how you want to spell them, they’re not really that great for you.  Sure, the perfect combination of sugar and carbohydrates is good for the soul.  But it’s not necessarily good for the body.

Which means every time I consider popping a doughnut in my mouth, I have an internal debate with myself about whether or not I really need this one.

Sometimes I win that debate with myself.  Sometimes not.

But I’ve found it’s not worth dwelling on it either way, because it’s just one small battle in a very long struggle.

There is No Final Battle

You are probably familiar with internal conflicts like my doughnut war.  It might be around what you eat, whether you go to the gym, make more sales calls, or anything else from a long list of ways that you want to improve personally or professionally.

Whatever you are trying to accomplish, it usually boils down to making better choices over and over again.  In these situations, success is a long-term and ongoing process.

There isn’t just one specific decision that will give you a permanent win.  You have to go back into the trenches over and over.

But that’s usually not the story we tell ourselves.  For example, in history books it’s common to point to a specific battle as the turning point in old wars.  The textbooks craft a narrative that leads to an obvious apex, and then say, “That was the point where everything changed.”

And in fiction, most stories have a climactic moment where the protagonist makes a shift that will last forever.  Or at least until the end of the book.

Celebrate Your Wins and Mourn Your Loses (Briefly)

In real life, things are messier.  Our struggles stick with us for much longer.   Just like wars are made up of many small battles and skirmishes, so too are the real-life stories of our personal journeys.

That’s why spiritual traditions all around the world often use the metaphor of a warrior.  They know that every day can be a battle.

This can be a disheartening moment: when you figure out that you’ll be working on what you’re working on for a long time.  Whether it’s eating fewer doughnuts, having the courage to speak up in meetings more, or showing up more authentically in your personal relationships, there are no permanent wins.

With a flip of the lens, though, this realization can also create more space to pursue your goals.  Because your failures and setbacks don’t derail the whole process.  You don’t have to give up when you get off track.  You can simply try again and work on winning the next battle.

It reminds me that giving yourself space for eating the occasional vanilla long john or jelly-filled doughnut doesn’t mean that you’re automatically going to lose every battle in the future.

In fact, it lets you rebound even faster, because instead of wallowing in recrimination, you can accept the setback for what it was and continue moving forward.  Instead of chasing the illusion of winning the war, you simply focus on winning the battle in front of you.

And when you do that, when you focus on the battle instead of the war, you tend to rack up a lot more wins.