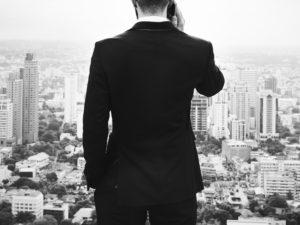 I’m a big fan of the movie The Commitments.  If you haven’t seen this story of a working-class Dublin soul band, I highly recommend finding it on Netflix.

I love this film for many reasons, including a scorching soul soundtrack. It has all of the drama you’d expect when you get a group of people trying to work towards a common goal.  And subsequently, it shares some powerful leadership lessons for the careful observer.

It also unwittingly taught me my favorite mantra about intention.

Before the band’s first performance they are backstage getting dressed in black suits, basically because their manager is forcing them to.  These are kids from the rough, working-class neighborhoods of Dublin, so suits are not anywhere in the vicinity of their normal attire.  And while they are grumbling about it, the one older musician in the band, Joey “The Lips” Fagan, says:

It’s a throwaway line in the movie, designed to set up some jokes.  But the first time I heard it, it struck a chord (pun intended).

No matter the activity, there’s something powerful about preparation, about getting ready for that activity.  It’s important to set your intentions for what you are about to do.  We get dressed up for big dates, sports teams wear matching uniforms, and soul bands put on their suits.  It’s a way of signaling to others, and more importantly to yourself, that you are ready to engage.

When I started my band we wore suits on stage.  They were garish and mismatched suits (we were called The Jesters after all), but suits nonetheless.  And when I changed right before showtime I knew it was time to perform.

When you start in the morning, think about how you are dressing for the work you are about to do.  Even if I’m not wearing suits as often these days, I often try to add in a pocket square and nice shoes.  It’s not about being sartorially sophisticated or showing off.  It’s about setting myself up in the right frame-of-mind.  When I’m deliberate with those steps I’m signaling to myself that it’s time to go to work and be my best self.

Do I think you have to dress fancy to do good work?  Of course not.  But I look around offices where ultra-casual attire reigns and I know that they are missing out on a great tool.  The conscious act of dressing for your role is powerful.  It’s harder to be intentional on the inside when you aren’t intentional on the outside.

In the next few weeks, ask yourself how the best version of you would dress.  And then do that.