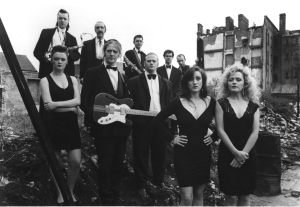 When people ask me about my favorite movies, they’re usually unprepared for one of my top choices, The Commitments, the tale of a scrappy Dublin soul band struggling to break away from the travails of working class life.

Even though many people haven’t seen (or have even heard) of it, the exploits of Jimmy Rabbitte and his band have deeply influenced my approaches to music, business, and life.  The fact that it’s also full of witty Irish repartee and has a solid soul soundtrack helps a little bit.

There are some powerful lessons on leadership that can be pulled from the story.

Are you putting together a soul band or a new company?

In the movie, a lot of the exposition comes in the form of Jimmy Rabbitte (the founder and manager of the band) talking to himself.  In his imagination he’s being interviewed about the beginnings of the band by BBC broadcaster Terry Wogan… after they’ve already made it big.  He knows what he wants to create.  He knows the band that he wants to put together.  Even the naming of the band is an exercise in vision development; “It’s a the, and all the great sixties bands were a the ________.”

Bring Together the Right Ingredients

Once he has that vision, Jimmy combs through the north side of Dublin to find his his musicians.  The ability to play an instrument is almost secondary; he’s looking for the desire and the hunger.  He wants people who will buy into the vision.  He’s looking for the right fit.  Whether it’s a bus driver with the voice of an angel and the mouth of a sinner, or the piano player with dextrous fingers (and access to his mother’s piano), he cobbles together a group that he can mold into a band.

Make it a Shared Vision 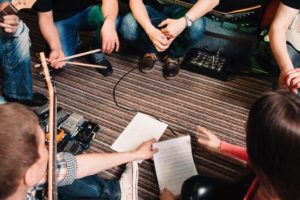 “Soul is the sound of the work class.  It’s the sound of the factory and ridin’.  Soul is the music people understand. Sure it’s basic and it’s simple. But it’s something else ’cause, ’cause, ’cause it’s honest, that’s it. Its honest.”  A bit of Jimmy’s passionate speech on a late-night train through Dublin has crept into every sales meeting and team pow-wow I’ve ever had.  He was pointedly telling his motley crew what they were going to create.  He was sharing his vision of the promised land.  Too often we think that sharing our vision requires a formal structure and the perfect environment.  Not true.  All you need is authenticity and emotion.

One of the best ways to build on that vision is to have everyone tap into a collective we.  As Jimmy tells a very nervous band of their new bouncer, “Sure, Mickah Wallace is a savage, but he’s our savage.”  And that savage goes on to protect the lead singer (who he can’t stand) and Jimmy from the hooligans who come to shake down the band.  They are connecting with something bigger than themselves.  When Bertie, one of the back-up singers, is telling Jimmy that she can’t get kicked out of the band, because she needs the band, you know they’ve become a “we”.

Put in the Work

One of the best ways to develop that togetherness is to work hard together.  I once heard that culture comes from a group having a shared emotional experience, and sitting in a room playing the same song over and over again, is definitely an emotional (and grueling) experience.  There’s a scene where the pool hall manager is shutting off all the lights (and you know a pool hall stays open late as it is), but upstairs the band is knocking out one more shot at Mustang Sally.  They’ve put in a full day and they are barely on their feet, but they sound good and they have a story to tell about the first rehearsal they had together.

Embrace the Unknown and Uncontrollable

You can’t control life and all of the ups and downs…and the even more downs that come with it.  Keeping the band together is a Sisyphean task for Jimmy.  Between managing personality conflicts, booking gigs, and finding a reliable van, it seems impossible.  I won’t ruin the end of the movie, but suffice it to say, The Commitments don’t end up as the opening act for U2.  But there’s a poetry to the end of the story and to the entire journey of the band, that has always spoken to me.  In the end, life rarely goes as you planned, or even as you wanted.  But you can fight it, or you can go with it.  I think Jimmy’s last quote was one of my first tastes of true Zen,

Jimmy Rabbitte: [interviewing himself] So, lookin’ back Jimmy, what have you learned from your experience with The Commitments?

Jimmy Rabbitte: Well, that’s a tricky question, Terry. But as I always say, we skipped the light fandango, turned cartweels ‘cross the floor. I was feelin’ kinda seasick, but the crowd called out for more.

Jimmy Rabbitte: [back to interviewing] That’s very profound Jimmy! What does it mean?