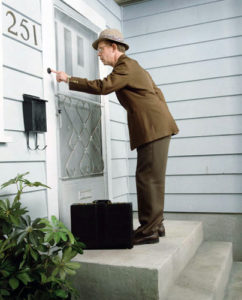 There’s a made-for-TV movie that came out a few years back called Door to Door.  William Macy portrays a salesman named Bill Porter who had a long and successful career selling door-to-door even though he had cerebral palsy.  It’s worth a watch for many reasons.

It’s also interesting because it highlights the constantly evolving nature of sales.  We make a mistake when we think that how selling works now is the way it’s always worked.  There’s a lot to learn when we look at how sales has evolved over the years.

Don’t Get Stuck with an Old Idea of Selling

In the movie, Bill Porter eventually loses his job, not because of his cerebral palsy, but because people stop buying from door-to-door salesmen.  The purpose and dynamics of being a salesperson changed because how people bought changed.  Going out directly to customers just didn’t work like it used to.

But it’s hard to let go of the pictures that we have in our heads.  Even now, when you think of selling I’m sure that an image of a pushy traveling salesman still lingers.  There are very few of them let, but we keep these ideas in our minds well after they are relevant (and useful).

This can be especially challenging when these old ideas keep us from adapting to new circumstances in the here and now.  For example, we’re currently going through another evolution in how selling works, but a lot of people on both the buying and selling side have old ideas of what it means to be a salesperson.

For example, “social selling” is a term that gets thrown around a lot these days, with lots of controversy and opinions following it around.  I would suggest, though, that the social selling debate is a red herring that is taking the focus off of the very real changes that are happening in the sales world.  It’s just a piece of the overall picture.

It’s hard to interpret the changes as we live through them, but a quick look back at where the sales role has been gives us a pretty good indication of where we should focus our attention now and in the future.

A (Brief) Modern History of Selling

All jokes about sales being the oldest profession aside, the modern conception of the salesperson is only about 150 years old.  During that time, the role of the salesperson has shifted as the needs of prospects and customers have changed. 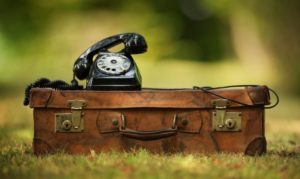 If you look at sales in the second half of the 19th century, it was all about selling the products of a newly industrialized economy. Before this, there was no need for “selling” in its current conception because the demand for goods outpaced what could be supplied.  The Industrial Revolution came along and changed that, creating a huge spike in our ability to create supply. From improvements in agriculture to large-scale manufacturing, it was possible to make more stuff, faster.

That’s why you see the birth of the modern sales career in the late 19th century (as well as the beginnings of marketing and advertising).  Companies needed a legion of sales reps to go out and sell these newly accessible products to the market.  The most important focus for a sales rep during this era was getting their product in front of as many people as possible.  Hustle and activity were king as opportunities were everywhere.

As the 20th century moved along, there is a shift.  Broadcast technology such as radio and television took over much of the marketing grunt work.  Instead of telling consumers that the products were available, salespeople had to tell prospects what made their products different, and therefore better.  Sales reps had to position what they were selling as the best solution because now there was competition.

The focus of selling became helping the customer along the decision-making process.  The salesperson’s job was to get in front of the prospect and get them the information they needed so that they could buy.  And of course, that information was going to lean heavily towards what their company provided.  Because salespeople had the information and the prospects didn’t, they had some leverage over their customers and could control the conversation.

The rise of the Internet in the last decade of the 20th century destroyed the chokehold that salespeople had on information.  Prospects and customers could now find details, data, features, prices, etc. with only a few button clicks. That glut of information came at a price, though: Overwhelming demands on people’s time and attention when making buying-decisions.

Interrupting a prospect’s day to provide more information wasn’t a reliable way to get customers anymore.  Now salespeople had to act as advisors for their prospects and help them navigate the increasingly complex buying process. Their job was to connect their solutions to the specific needs of those they worked with. Effectiveness became much more about being a consultative problem-solver.

Looking into the future it’s possible to see the next challenge that prospects are going to have. It’s already starting. When a prospect has a lot of information and a lot of people trying to help them decipher and process that information, trust is going to be at a premium.

Sales Professionals Need to Evolve Too

At its core, the evolution of the sales process means that salespeople can’t rely on brute force anymore.  Activity and engagement are still going to be relevant, but it’s going to be important to add expertise, perspective, and experience to the selling mix.

Going back to the example of social selling.  It’s not about using social media in sales. Rather, it is about using digital tools to gather information so that you can more accurately take care of your prospective clients’ needs. Using online platforms provides new and interesting ways to communicate with people in different forums.

Finding success with these tools still requires many of the old-school communication skills that served salespeople well, they just need to harness the new mediums of relationship-building.  These days, clients are looking for help with the buying process from someone they can trust.  They don’t have a lot of excess time and attention, and they do have an overload of information.

So as the world of sales evolves, the professionals in it need to evolve as well.