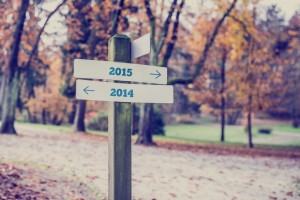 In the closing days of 2014, are you looking back at the year that passed or are you looking forward into the next?  I’ve found that most people do one or the other.  They rehash the previous year, the good or the bad.  And they rate themselves on how it went.  Or they plan out the upcoming year, with goals, resolutions, and dreams.  Sometimes, in a fit of introspective intensity, they do both!

I’m sitting at my desk, thinking about what I want 2015 to look like and the goals of 2014 that I hit (wrote a book) and missed (did not learn Spanish fluently).  And I realized that the analysis of the past and the dreaming of the future are in some ways the same process!

Every Beginning Is an End

I remember coming across a saying in a book on Buddhist philosophy that the end of something is present at its birth.  I know, heady stuff!  Basically, the idea is that because everything is inherently impermanent, the beginning of an undertaking – a company, a project, a life – presupposes that one day there will be an end.

So just like I planned for 2014 a year ago and am now tallying my successes and failures, I will be doing the same thing in a year.  Because 2015 will come to an end just as surely as 2014 is finishing up right now.

What possible practical implication could this have?  For me, it means that I can bring a little more humility to the process.  I can be a little kinder to myself about what I didn’t accomplish this year and little more humble about what I did.  I can dream big for 2015, all the while knowing that my happiness doesn’t have to tied to my achievement.  Because I know that sometime around December 30th, 2015, I’ll be having the same conversation with myself as the year comes to a close again.

And in the meantime, I wish you all the happiness, peace, and success that you are looking for in the New Year.  Thank you for spending a little of your time with me in 2014.  The next year promises to be filled with adventure!