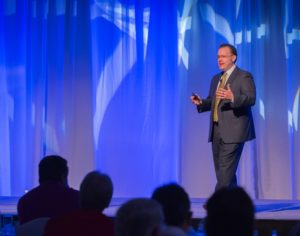 Years ago I read through Scott Berkun’s Confessions of a Public Speaker and I came across the line:

Know that your response to a mistake defines the audience’s response.

And I thought to myself, “Dude, you couldn’t be more right.”

It’s continued to stay relevant to me as I’ve moved beyond my normal public speaking and into the digital realm.  Because now I can often see the mistakes I make in real-time!  When you have a camera on you, and a little window of yourself in the corner of the screen, it can be a little intimidating.

The Audience Only Cares if You Do

And now everyone is a public speaker because of video calls and webinars.  Doesn’t a Zoom call feel like a bit of a performance?

One of the advantages I’ve had in the world of digital communication is my public speaking experience.  I’ve spent most of my professional career speaking in front of people as a sales trainer, keynote speaker, and meeting emcee. Often people ask me about the trick to being successful when presenting to a group. I’ve found that of all the skills and techniques that are valuable for any public speaker, the most important is confidence.

But it’s a special form of confidence.  It’s not about knowing that you are going to be perfect. Rather, it’s a confidence born from the knowledge that you will make mistakes.  And those mistakes are completely OK and it doesn’t have to detract from your success as a speaker.

That sort of confidence comes from getting experience in making mistakes… and then realizing they aren’t the end of the world. I was lucky because I was able to hone this skill outside of my professional life. I’ve always enjoyed performing – playing drums in a band, improv sketch comedy, and this might be a bit of a surprise, teaching Zumba® classes (I know, wrap your head around that visual).

So I learned early and often that things would happen that I didn’t intend. It’s especially common in music and dance – things are moving so fast that it’s easy to miss a cue or hit a wrong note.  It’s not about avoiding mistake 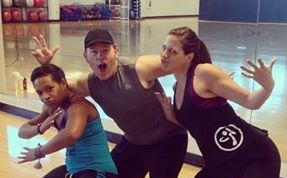 Move Through Your Mistakes

For example, it happens all of the time when I lead Zumba classes. I’ve taught for over a decade, but I still make mistakes in every class. In fact, I make lots of little mistakes here and there.  Even during the pandemic, when I taught over Zoom (yes, there were a lot of Zoomba jokes), I kept making mistakes.

If I stopped halfway through a song because I forgot a piece of choreography or cued something incorrectly, we’d be stopping over and over. So instead, I just laugh it off and keep going. I don’t get embarrassed, I don’t apologize profusely.  In fact, I find that most of the time no one in the class even notices, and everything keeps going along nicely.

So when people ask me for suggestions, I give the same advice whether they are an aspiring public speaker or Zumba instructor: “The audience doesn’t know what is supposed to happen. If you make a mistake, it will only be a big deal if you make it a big deal. So instead, smile and move on.  Don’t get flustered – own it.  You can even pretend that you meant to do it.  And then move onto the next moment and try to make that moment rock.”

If you have that mentality, you will stand in front of any group knowing that you can handle whatever comes along.

And that is real confidence.