This article was originally published a few years ago at the RockStar Success Library. But it's still as relevant as it was then.  Don't make too quick a judgement ;-) In Blink, Malcolm Gladwell goes from his examination of macroscopic communication in The Tipping Point to the other end of the spectrum.  With Blink, Malcolm looks at the power of first impressions.  And more importantly, he examines how our minds create these first impressions and why they have so much power over us. One of the main concepts that Malcolm looks at is the idea of thin slicing.  This is how he describes that act of making decisions based on a a small amount … END_OF_DOCUMENT_TOKEN_TO_BE_REPLACED 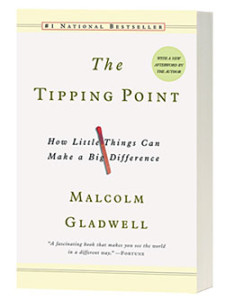 This article was originally published a few years ago at the RockStar Success Library. It's ideas were influential as I was writing Networking in the 21st Century. The Tipping Point is the biography of an idea…Ideas and products and messages spread just like viruses do” (pg. 7).  That’s the description of the book straight from Malcolm Gladwell’s mouth, er, keyboard.  Basically a sociological and psychological study on how cultural ideas spread, The Tipping Point offers an interesting examination and extrapolation of the factors that cause a message to become “viral”. All you have to do is google viral marketing and you’ll see the hold … END_OF_DOCUMENT_TOKEN_TO_BE_REPLACED 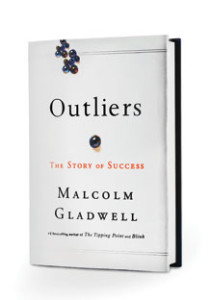 This article was originally published on April 10th 2009.  If you haven't read Malcolm's stuff yet - go read it!  You won't be disappointed.  The 10,000 hour idea that he popularized only holds up for mastering in highly-competitive fields and doesn't translate to most activities (watch this TED talk on how long it really takes to learn a skill).  Still, it's great food for thought. Malcolm Gladwell has an uncanny ability to pick a small, below-the-radar aspect of human experience and use it as a jumping off point for an exploration of how our brains work.  In doing so, he usually goes well beyond the initial topic and invariably ends up … END_OF_DOCUMENT_TOKEN_TO_BE_REPLACED