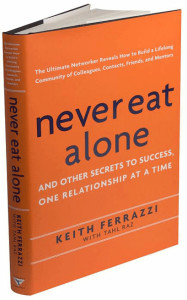 This article was originally published on January 24th, 2011. This was one of the first books on networking that I ever read and it still holds a special place for me.  It was the first book that I read that married the strategies with the tactics of professional relationship building.  I still highly recommend it. It was good to reread Keith Ferrazzi's Never Eat Alone 5 years after I first came across it. As I dove into it again, I realized how much of Keith's philosophy and tools I have incorporated into my own networking over the past few years.  In some ways, it felt like I was going back to the source material, the original ideas, that … END_OF_DOCUMENT_TOKEN_TO_BE_REPLACED