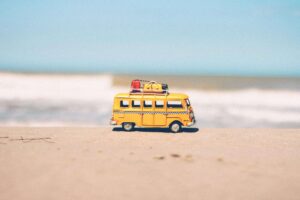 I’m not sure if this is just a Midwestern thing, but in the summer a lot of companies have “summer hours”.  Usually it means that there’s some sort of abbreviated schedule on Fridays.  Like everyone leaves the office (remember, this has been around well before working from home) after lunch.

My guess is that it stemmed from people around here understanding that the summer weather was a precious commodity.  “Let’s get the work done in February when it’s 14°.  Now is the time to go grill out and have a High Life.”

This year it’s taken on an even greater impact as people are trying to get out on vacations that they couldn’t while locked down.  It’s been a July where it’s been hard to get work done because so many people are traveling.  And it’ll probably be that way into August.

There’s this urgency to getting out that I haven’t seen before.  The pandemic and social-distancing made many of us aware of how easy it was to take things for granted – like a summer vacation with the family.

But I’m trying to keep in mind that even this season, with the stresses and uncertainties of the pandemic still around, will be ephemeral.

Even when things change slowly, they change.

That’s something I also remind myself after two years of raising my son.  The first few years of parenthood are a lot, even without a pandemic.  It’s easy to think that my life will always be like it is right now.  Because, sure, he’s great.  But he also sucks up a lot of time, attention, and bandwidth.  However, I’ve been told by those who’ve gone through it that I will eventually get a little bit of my time back.  So I’m trying to appreciate the good for what it is: fleeting.

It’s like the seasonal beers that craft brewers are making these days.  For example, right after the season of summer vacations will the be season of Oktoberfest beers – one of my favorite styles.  Traditionally, they are brewed for the fall and that’s it.  Enjoy them while they’re here, because they’ll be gone soon.

I think they taste a little sweeter knowing that you only have a brief moment to enjoy them.

And hey, if you don’t dig them, don’t worry.  Soon it’ll be time for another season and another style.

What season is your life in?  How can you lean into it?  It won’t be here for long.