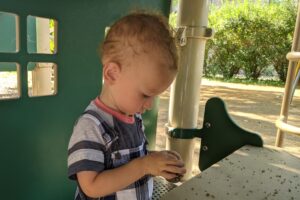 One of the perks of being a coach is that you often learn as much from your coachees as they do from you.  It’s ironic, but when you have a ringside seat to someone’s growth journey – their ups and downs, struggles and victories – it becomes a mirror that you can hold up to your own path.

I’ve found that’s also the case with parenting.  Sure, I might be teaching Liam new words, how to brush his teeth, and the best way to build a Lego house.  But every day I’m picking up new perspectives and insights into how to approach my own life.

And as we celebrated his 2nd birthday this past weekend, I thought it might be worth sharing some of what I’ve learned from Liam.

I’m not even sure if these are lessons. Because rather than being true epiphanies, they’re really pointing me back to fundamental truths that have been there all along.  So maybe calling these “Reminders from Liam” would be more accurate.  Whatever I call them, they’re good to keep in mind as we go about our days.

1. There are very few true emergencies when you just accept the present.

I thought that I was relatively flexible and ready to improvise before Liam came along.  I didn’t know the half of it.  There’s just no way I can be rigid because plans, moods, and focus can change on a dime.

But what I’ve found is that it’s usually not a big deal.  If we have to zig left instead of zagging right, that’s OK (unless he’s literally trying to zig himself into the street).  We just roll with it.  Heck, this article is being written later than I would like, but it’s still not the end of the world.

So where are you being more rigid in your thinking or expectations than you need to be?

2.  A short memory can be a useful thing to cultivate.

Most of what Liam does isn’t “right”.  He mispronounces words.  He trips and falls a lot.  Even buckling himself into his high chair is usually an exercise in futility.

But he still keeps talking (constantly), runs everywhere he wants to go, and keeps trying to buckle that belt.  He doesn’t sit there, fixated on his last attempt that went askew.  He doesn’t get paralyzed by his failures and stress about his chances for success.  He just goes back and tries again.

Where is your memory of past failure keeping you from doing something?

One of the upsides of the pandemic was that Liam and I have had the chance to spent a lot of time together, probably more than if I was traveling for speaking gigs and client work.  And our relationship is the stronger for it.

But I couldn’t point to any particular excursion or experience that was a key moment in building our relationship.   It really is about the agglomeration of shared time.  You can’t turn on the relationship “faucet” on-demand.  It’s not about quality time – it’s about quantity of time.

Whether in your professional or personal life, who are the people that you need to share some more time and space with?

4. If you aren’t sure what someone is saying, slow down.

But if I slow down and take the time to translate his words and ask a lot of confirmation questions, I can usually figure out what he wants.

How often are you slowing down when you aren’t sure what someone is asking for?  And how many times do you just assume you know what they want?

The not-so-secret secret of parenthood is that we’re all making it up as we go along.  I don’t care how many books you read, podcasts you listen to, or online parenting groups you are a part of, you still can’t know how to handle every situation and nuance.

So I’m doing the best I can.  I make some good calls, and some bad calls.  And though I’m sure he’ll have something to talk about with his therapist when he’s an adult, the intent is always to do right by him.  So I constantly remind myself that I can cut myself some slack.

And whether you’re parenting, building a business, or just getting through the day – it’s OK to not know all the answers.  Just do your best, and you’ll be fine.