If you aren’t in the music world, you might assume that all of them are the posh creative dens that you saw in a documentary about your favorite musical legend.  Those are the studios for true rockstars.  In reality, most music is recorded in conditions that are less than ideal.

Even if it is a nice studio, when you add a bunch of people, long hours, and the stress created because you need to get it perfect, it gets cluttered, sweaty, and well, smelly, pretty fast.

When you get right down to it, a lot of the music you enjoy is recorded in pretty grungy circumstances.

This just goes to show you that a beautiful environment isn’t a requirement for the best creative output.

The important thing to remember about recording studios is that they are only focused on one sense: sound.  It doesn’t matter what they look like.  You don’t want to spend a lot of money making it look nice because nobody but the musicians and techs are going to see it anyways.  All you need is the ability to cut out external noise and record on a few good mics, and you’re in business.

And technology like digital recording and computers have revolutionized the process and made recording way more inexpensive than it was 20 years ago. But that doesn’t mean that you want to increase the cost by paying for an expensive location.  So studios are still in “out of the way” places.  I’ve recorded in basements, industrial parks, converted loft apartments, and Dixon, Illinois.

Then you jam a bunch of people into this small space in a limited period of time with the pressures of creativity and you, know getting the songs done.  It’s pretty intense.  My band recorded our second album in a jingle studio that rented itself out to bands off-hours.  So take all that pressure and put it into 1:00 in the morning.

For everyone but the most-established musicians, that’s how music is recorded.

You can still make great music like this, and I guarantee that you’ve had fun dancing to a song recorded exactly like that.

You Don’t See the Forge, You Just See the Result 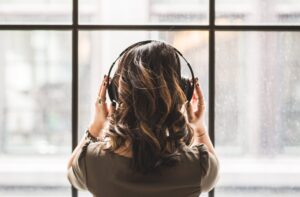 For most of us, the past year was that cramped, sweaty, ugly recording studio.  It was a crucible that we didn’t ask for.

It might not even feel like you knew what you are were trying to make.  Maybe you were just trying to keep your career going and keep yourself relatively sane.

And that’s OK.  Even if you just felt you were treading water, you were also putting together ideas and learning new skills.  Even if that new skill was simply resilience in the face of uncertainty and fear.

Don’t think that because it wasn’t a perfect situation, that you couldn’t create something valuable and beautiful.  You might have already created your top 40 hit and you just don’t know it yet.

Beautiful music comes from grungy studios.  And our greatest achievements come from the most challenging of circumstances.