Native video on LinkedIn has become a hot topic. These days it’s common for social media gurus and marketing experts to extol the virtues of video for sharing your brand message and engaging your audience.

And with LinkedIn Live still early in its roll-out, video promises to continue to grow in prominence.  But if you aren’t an influencer with a boatload of followers, is it really worth the time and attention we’re giving it?

This is an especially important question for salespeople and other non-marketers who want to engage with their network.  With limited time and resources, they have to ensure that they are getting the best bang for their buck.

And it’s a question I wanted to answer: Is LinkedIn video worth using for the average member?

Creating and sharing LinkedIn videos takes time, energy, and effort.  Especially if you want it to be high-quality.  This becomes especially true when trying to put out a consistent schedule of content.  It can be intimidating, and it prevents a lot of LinkedIn members from sharing anything at all.

This is reinforced by the fact that many of us aren’t top-tier influencers.  Compared to content creators like Tony Robbins or Gary Vaynerchuk, most users have a much smaller sphere of influence.

But I thought that many of us might be selling ourselves short.   Many salespeople would be well-served by a micro- or nano-influencer approach where they focus on becoming the go-to resource for a smaller group.  By sharing your message consistently, you can raise your visibility and establish your brand within your network.  Even if that network numbers in the hundreds or thousands (instead of the tens of thousands), it can drive engagement and create opportunities.

To test whether LinkedIn native video is effective in creating reach for salespeople, I used myself as a guinea pig for the experiment.  I recorded a 3-4 minute LinkedIn video every day for a month (March 2019) and tracked the resulting engagement.

Get the Full LinkedIn Video Report

It’s important to know the size of my network to establish the proper context for the experiment.  While my following on LinkedIn was not insignificant, it wasn’t massive by any means.  I was never a L.I.O.N and had not developed a network into the tens of thousands.  During the course of the month I had approximately 4,300 connections and followers (a little less at the beginning and a few more at the end).

Here are the experimental guidelines:

I looked at the reach of the videos on April 6th (to give the last videos of the month the opportunity to get some traction).

Here are the numbers:

Are these staggeringly huge numbers?  No.

Are they powerful numbers for a typical salesperson or micro-influencer.  Heck yeah! 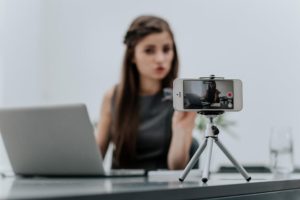 Getting over 20,000 views for about 8 hours of work over the course of a month is a decent return.  My efficiency increased as the month went along as well, so I was able to create better videos more quickly.

This means that LinkedIn Video is a powerful addition to your marketing mix.  It’s a powerful and accessible way to increase your engagement with your current network and to bring in new connections.

(And by the way, if you are a marketer for a larger organization, this is why you have to engage your sales team and other employees.  Imagine getting thousands of content views without paying for paid promotion.)

After analyzing the results, it is clear that LinkedIn native video is valuable for front-line salespeople, freelancers, and business owners, not just the celebrity marketers and influencers.

And I have a few suggestions that will make your video-making and sharing much easier.

Video is an important way to share your personal brand. Whether you are a sales professional, business owner, or freelancer, it can enable you to cultivate awareness with your existing network and also put you in front of a broader selection of your 2nd- and 3rd-level connections. Asking for opinions and addressing important topics creates an easy “in” for people to like and comment.

This is an easy way to stay visible and relevant to your network.  And that’s incredibly important in a noisy and information-soaked business environment.

You create engagement by creating conversation.  And LinkedIn video is a great way to do just that!