Do you set New Year’s Resolutions? 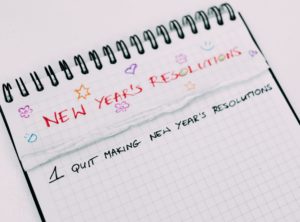 I’ve found that they’ve become a bit of a punching bag.  In a very unscientific survey of those around me, most people seem to have given up on setting resolutions.  Most people pay lip service to working on their goals, but they rarely make concrete plans.  Instead, they express vague desires to improve in the new year.

Resolutions get dismissed as a waste of time.  Why start when you’re just going to give up on them?

We’ve set resolutions and goals before.  And we’ve disappointed ourselves by giving up or not following through.  So why put ourselves in a position to fail again?

I’m not here to convince you to set New Year’s goals.  But if you are looking to make some changes, there’s some research that might help.

It shows that the timing of when we start our new goals is important.  Temporal landmarks are days that stand out from the ordinary and allow us to mentally break from the past.  They help us to make a fresh start when we’re working towards our goals.

And January 1st is definitely a big day.  It’s a good temporal landmark.  But it’s not enough.

We fall into a trap when we only think about the starting day for our goal.  It’s easy to be fired up for the first few days of your new activities.  That’s why gyms tend to be full right after New Year’s Day.

But what about a few days after you start, or a few weeks?  The initial excitement wears off and it can be hard to keep yourself focused.  You’ve probably heard that that it takes 28 days to start a new habit.  It’s more like 2-3 months.  But no matter the exact time, your initial energy is going to wear off before you’ve habituated the new activity.

An important temporal landmark to set is the one where you re-focus your energy.  A good place to plant that flag is on the weekly anniversary of setting your goal.  Every week after you start, re-affirm your commitment to the changes you want to see.  It’s a chance to celebrate your victories and get back on track if you’ve slipped.

So don’t give up on your goal-setting!  January 1st is an important day for starting something new.

And January 7th is a key day to check back in and keep the momentum building!