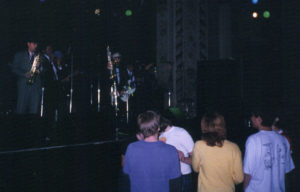 It’s a simple premise.  But it’s one of the best things I learned while playing in a band in Chicago.

When you think of a music concert, it’s easy to think of the last Lollapalooza or arena show you went to.  Thousands and thousands of adoring fans packed in and singing along.  Or maybe it was a street festival with the popular cover band that packs them in.

But when you are starting out, it’s hard to get anyone to pay attention to you, much less come to a show.  It doesn’t matter how good you are or how hard you practice.  Pulling people to your performances can be really, really hard.  It’s even worse in a city like Chicago.  There are so many options that it’s hard to stand out among the other 90 bands that are playing that night.

It forces you to play your heart out for whoever shows up.  Even if that’s just significant others and best friends.  Even if it’s just one random person at an out-of-town show.  Your goal is to play like the room is filled to bursting.

Is it frustrating?  Of course it is.  But you have a choice: bitch or play.  I learned quickly that instead of bemoaning the people who weren’t there, it was a lot more fun to be grateful to those that showed up.  They are the ones that you have to play for.

I was thinking about this after my 8th book launch in the past 4 years.  Here’s what I’ve learned:

They never go like you want them to, but lots of really good things happen.

In my heart of hearts, I dream that thousands of people will buy my book and it will be magically catapulted to the New York Times bestseller list.  But that doesn’t happen.  Sometimes we sell as many as I think we will, and sometimes the numbers fall short.

And every time I have that same choice.  I can complain about the people that didn’t buy it.  Or I can be humbled by and grateful for the people who are willing to spend some attention and money on something I’ve created.

Whether you play in a band, write books, sell stuff, manage projects, or develop spreadsheets, there will be times when you don’t get the response you hoped for.  And it’s good to have those expectations, but always remember that you get to choose how you respond when they aren’t met.