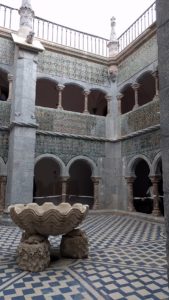 I have a question for you.  One that may not have an answer.  Or maybe the answer is simply another question.

“What will you do on the day after you achieve the thing that you are working so hard for now?”

I’m not looking for an “I’m going to Disneyworld!” answer.  Yes, assume that you are going to celebrate your hard-won victory.

Each Goal is Just a Chapter

On a trip to Lisbon, Portugal, I was struck by the history of the place.  The country was reaching it’s dominance on the world stage around 500 years ago.  So go back to the founding of the United States, and then go back that same amount of time again.  That’s when you get to Portugal leading the charge and connecting the world as it never had been before (for better and worse).

The history in Lisbon, though, was very…accessible.  There were churches and palaces and streets where people lived and worked and worshiped.  These weren’t just crumbling amphitheaters.  It was tangible.  You could see the heights that they’d achieved.  And you could sense how long ago it was.

And that time is long gone.  That part of their story is over.  Now, Portugal is simply a small corner of the world.  They have a rich story behind them, but nobody is looking to them as the world super-power that they once were.  The story continued, but they had passed the mantle of trailblazer to other countries over the intervening millennia.

What is the Epilogue to Today’s Story?

So what will you do after you get the promotion, win the sale, make the money, buy the house, find the soulmate, et cetera? Too often I meet people who have a goal and don’t have an idea of what the next page will bring.  And I think that prevents them from realizing two important facets of working towards that goal.

First, it makes it harder to hit the goal because there’s no context.  If you just want to get a promotion for it’s own sake, you’ll flounder a bit.  But if it’s part of a larger story you are creating, you’ll know the “why” that connects your current actions to the future.

More importantly, you’ll know who you are looking to become by arriving at your destination.  It’s not so much about climbing the mountain to see the view from the top as it is to become a different person when you’ve come back down.  And in many ways, that’s a richer and more interesting story to live.

What are the two or three biggest goals you are working on right now?

Who will you be after you achieve them?