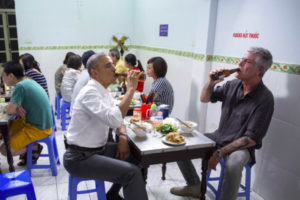 That was a statement made by my wife last year while watching an episode of Anthony Bourdain’s Parts Unknown.  It’s one that I could echo.

And it was an understandable sentiment.  It seemed like a pretty good life.  Travel around the world, go to interesting places, eat delicious food, spend time with fascinating people.  Even his demeanor seemed well earned: grizzled and patient, with the self-awareness of someone who had a tough life and made it through.

But as is often the case, we didn’t know the whole story.  And one of the people who didn’t want his life… was Anthony himself.

“Over There” Isn’t The Solution

It’s been a few weeks since he took his life, and there is much that has been and will continue to be written about him, his impact, and the challenges that mental illness can pose.

But I want to throw out an idea.  An idea that is at the heart of many of our tensions as humans.  Especially those of us who are American, entrepreneurially-minded humans (myself definitely included).  It’s a tension that I don’t have an answer to, that maybe no one has an answer to. But in my opinion, keeping it in front of us is one of the keys to living life well.

Happiness is not somewhere else, but we have this sneaking suspicion that it is.  It’s hard to remember that there is no where or when you can go to, no heights that you can achieve, that will make everything in your life good.

It’s easy to look at the experiences that Anthony was having, and think “If I had those experiences, I would be happy.  It would be awesome and I would be content.”  But that’s not the case.

This is top of mind for me because most of us are going through the world, trying to better ourselves.  Heck, I am.  I spend a lot of time trying to build myself and my business.  I often think: “When I have X newsletter subscribers I’ll be set.  When I have more speaking gigs, I’ll be happy.  When I have published my next book, when I have learned Spanish… blah, blah, blah.”

And you do it too.  It’s OK.  It’s part of the dissatisfaction of human existence.  (The constant drone of advertising, personal development, and well-meaning advice givers doesn’t help.)

But in the end, it doesn’t matter.  There is no place you can be where the suffering of life isn’t going to be there.  Sure, you can have a higher class of problem, but you’re still going to have problems.

They say that it’s not the destination, it’s the journey.  And I think they are right.  There’s nothing wrong with working in the moment to move yourself towards a goal. But remember that when you get there, well, you’ll still be there.