There’s an awful lie that I see tossed around by social selling “gurus”, technology ninjas, and futurists.  They love to suggest that technology has caused humans to evolve.  For them, technology is driving a fundamental and permanent shift in the way we communicate, engage, and even think.

They think that Facebook and other social media platforms are changing how we relate to each other.  Or the fact that we can look up that “one actor in that one movie” on Google (instead of putting brain power into remembering) demonstrates that our memories now work differently.  The argument goes that changing technology leads to changing people.  In their eyes, the rise of technology has driven a fundamental shift in how our brains work.

But it’s just not true.

Yes, the environment that we live in does impact us.  Just like living in a smog-filled city will affect the way your lungs work, staring at a smartphone all day will influence cognitive skills.  That doesn’t mean the foundational structure of how the brain works has changed.  And it doesn’t mean that we’re going to pass it on to our kids.

Could technology influence how humans to evolve?  Absolutely – over the next few millennia.  But it’s not going to happen just because Apple came out with the iPhone 19 and we’re all on our devices constantly.  That’s not how evolution works.  In fact, there was an immediate predecessor of Charles Darwin’s named Jean-Baptiste Lamarck who had just that theory, and it’s been widely disproved.

David Epstein explored this very topic when we spoke at an early TED Conference.  He looked at the stunning increases in Olympic performance over the 20th century and seemingly constant world record performances.  He pointed out, though, that humans weren’t getting better.  Instead, technology was improving, and the rules were changing to create better results.

So yes, technology had an impact.  But it was changing our abilities.  It was augmenting them.

It’s easy (if misleading) to extrapolate that quick shift to all sorts of development, including human evolution.

Research shows that our brains do react to technology and adapt to it, just like pipe smokers’ teeth do if they smoke their entire lives.  But just like a smoker’s kid would have normal teeth, so would our children if they didn’t have exposure to new devices.  Technology isn’t going to completely change how our brain is wired in just a few years. 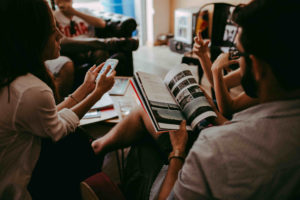 If you are in a sales profession (or any person-facing role), this misunderstanding of how evolution works will harm your career.   It can take your focus off of what’s most important: basic human interactions that have been important for thousands and thousands of years and will continue to be relevant for thousands more.

We’re in a time of great technological change, which is exciting and offers a lot of opportunity.  But it’s not going to radically change humanity.  If you really want to harness the power of the new technology, you need to look at how it can be used to improve those existing human dynamics.

Technology is useful.  It can help us communicate and share information.  It allows us to engage with each other more effectively and more deliberately.  But it also creates noise, overwhelm, and confusion.  It’s not an answer to everything.

Our essential humanity, and our essential human needs haven’t changed just because of smartphones and computer algorithms.  Our brains haven’t evolved.   When it comes to doing business by building relationships, whether that’s to sell, network, or collaborate, it’s important that you still focus on engaging with those basic human needs.

We’ve been doing that for millennia, and technology isn’t changing us anytime soon.