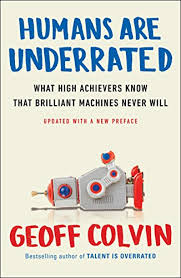 Because of a shortage of shelf space at home, I usually try out a book from the library first.  I only buy it if I can see myself coming back to it for reference.

Here’s the deal: I got one chapter into Humans are Underrated before I put it down and ordered it on Amazon. Geoff is addressing the very human capacities that I’m talking about all of the time with salespeople and professionals. When I talk about the evolution of sales that is the core of Hyper-Connected Selling, I’m constantly pointing out that computers can do lots of routine and rote tasks well, but humans are the best at being human.

To find success in an increasingly technological world, people don’t have to out-compete machines.  Which is good, because the computers would win.  Instead, people need to nurture, expand, and leverage their uniquely human skills.  Namely, they need to use empathy and social connection to find a place in the new economy.  As Geoff writes, the evolving world asks us, “to become more essentially human, to be the creatures we once were and were always meant to be.” (page 212)

As Geoff writes, “we are hardwired to connect social interaction with survival. No connection can be more powerful. We can easily forget – living and working in highly developed economies, doing linear, logical, rational thinking all the live long day – that such activity is not in our deep nature.”(page 3)

–The list of human universals that the researcher Donald E. Brown put together fascinated me.  It shows the qualities that transcend the specifics of culture and make up our “humanness”. (page 39)

–I argue that humans will still find relevance in the sales process.  Mostly because so much of the process involves navigating unknowns and unspokens.  Prospects rarely have a clear idea of what their problems really are.  And they rarely know exactly what they need to do to solve those problems.  That’s why I think the idea of a Sales Sherpa™, a guide, resonates well.  And when Geoff talks about roles that will still be the land of people, we find that it reinforces this idea.

“What activities will we continue to insist be done by humans? A large category of them comprises roles for which we demand that a specific person or persons be accountable… In addition, there are problems that humans rather than computers will have to solve for purely practical reasons. It isn’t because computers couldn’t eventually solve them. It’s because in real life, and especially in organizational life, we keep changing our conception of what the problem is and what our goals are.” (page 43)

–The idea of empathy remains nebulous for many of us.  So much of it happens at a sub- or unconscious level that we don’t even know why we know how people are feeling or how to respond appropriately.  But it’s a powerful skill.  And I think we are seeing that becoming more relevant in the sales world as the brute force activities (like prospecting) are being increasingly automated.

–It will be interesting to see how women are able to leverage the value that is placed on empathy in the new economy.  As Geoff points out, the brain differences between the genders are going to help women in an environment that favors empathy and social interaction.

I think that will be controversial because it puts men in a bad light.  Also, we often mistake “equally” as meaning “identically”. (I.e., current thinking often conflates “we have to treat everyone equally” with “we have to treat everyone identically”.)  But it will be exciting to see women with a competitive advantage.  As he reports on creativity research in groups, “…another way to predict the most effective group was much simpler: Just count the number of women.” (page 125).

It’s going to continue to be important to not fall prey to the ease and superficiality of digital communication. In other words: don’t hide behind email and social media because it isn’t as powerful as creating true engagement.  We didn’t develop our empathy in an environment filled with computers and smartphones, and the skills don’t translate. (page 129)