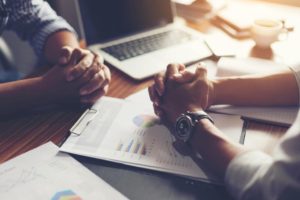 There’s the old, tired cliche that all things being equal, people do business with those they know, like, and trust.

…Here’s the thing, it’s an old, tired cliche because it’s FRICKIN’ TRUE.  If you are trying to build your sales success by taking shortcuts and not creating that trust, that emotional bond, with your prospects and customers, you are building a house on a foundation of sand.

But it doesn’t take much time, or any fancy tricks, to create that connection with your prospects and leverage the most powerful sales tool you have in the modern sales toolkit: your humanity.

Too often, we think a gimmick or trick is the key to sales success: a new app, a specific sales cadence, or a cold-email script.

But when you think of the essence of your sales conversations, what creates the human bond between you and your customers?

It’s not the features and benefits of what you are selling. Or your sales playbook.  It’s not your pricing strategy.

It’s the way you engage with them.

In the rapidly evolving sales world, it’s going to require more than the perfect PowerPoint presentation or slick list of objection-handling responses to be successful.  In fact, moving forward there will be one of two paths your sales job will take:

It’s not about doing routine activities over and over, it’s about leveraging the human skills you have.

Creating a connection with your prospect starts from your very first interaction.  If you want them to trust you when you make a suggestion down the line (e.g. a closing question), you have to set it up from the start.

The first place to hone for increased sales success, then, isn’t the end of your sales conversations, it’s their beginning. For example, too many salespeople think that small talk is something we engage in before we get to the important stuff. In fact, they’ll try to skip over it because they think it’s a waste of time.

But there’s no such thing as small talk, just small salespeople.

If you skip over small talk, you skip over the first chance to make build a bond.  Talking isn’t always about sharing information, it’s also about developing a social bond.  Communication scientists call this phatic communication.  It’s why asking someone how they are doing is so important.  You’re not asking because you need to know.  You’re asking to show that you care.

3 Mistakes That Set Your Conversation Up for Failure 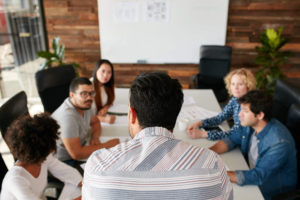 Your prospects don’t sit around thinking, “Gosh, I really wish someone was just talking at me right now.”  Which is unfortunate because most salespeople get into sales because they were told they were a good talker.  I know I did.  But that’s just not the case.  If you just talk at the person there’s no opportunity to create a real connection.

The best salespeople understand this and know how to reverse it.  If you want to be interesting to your prospects (and get them interested in what you are offering), take an interest in them.  You don’t have to be interesting, instead, be interested.  That’s how you create a connection.

I’ve seen salespeople get so excited that they have a real live prospect that they end up going overboard and killing the relationship before it can breathe.  Here’s the fastest way to do that: spend the first few minutes bragging about how awesome you, your offering, and your company are.  Prospects don’t care how successful you are.  They don’t care about your awards.  And they don’t care how good your company is…yet.

Salespeople do this because they think that they have to start “sharing value” right from the very beginning.  But it just sounds like bragging, and that isn’t the way to make them trust you.  As the writer Denis Waitley suggested, “The less you try to impress, the more impressive you are.”  When you are first creating the bridge of rapport with someone, don’t go overboard.

I’m sure you’ve been in a conversation with someone when they “jumped the shark” and took things way too deep way too fast.  You’re just chatting with someone you met at a party and all of sudden they’re telling you how horrible their ex-girlfriend is (in detail) or they are asking you about your feelings on religion, politics, and the 2nd Amendment.

This does the exact opposite of what you are going for: it pushes people away.  Don’t assume you have to be best friends with your prospects in order to create trust.  Avoid oversharing or pushing them to tell you their deepest thoughts and opinions.  You don’t have to be BFFs, just friendly. 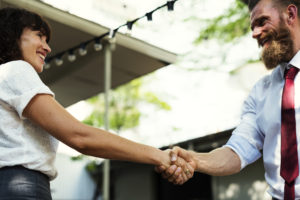 One of the challenges with scripting relationship-building is that it can come off as stilted and fake.  It’s one of the reasons why salespeople often resist any kind of scripting at all, but that’s throwing the baby out with the bathwater.

We all have different personalities and different styles.  The key is to find a few guiding questions and ideas that you can bring into your conversations to help you build the relationship.

And important to note, none of these ideas has to take a lot of time.  Even 60-90 seconds spent on relationship-building can have huge benefits on your sales conversations.

What if you are starting a conversation cold?  For example, what happens when you have prospect who is willing to give you 5 minutes, and that’s it.  Time is of the essence, and you can’t ask for a person’s life story.  But even a simple question can build the emotional bond:

When you are going into a conversation that isn’t as time-constrained, there are a lot of opportunities to build the relationship.  Let’s say you have a sales presentation scheduled for 30 minutes.  You can easily spend a minute or two talking with the other people at the meeting: 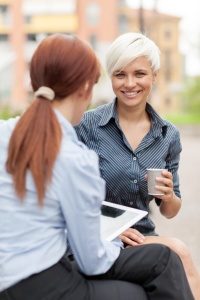 As you move into more complex (and longer) sales cycles, there will be more opportunities to build the bond between you and the people you work with.  You will have more time to focus on relationship-building.  Unfortunately, it will also be easier to take that for granted and let your connections wither.

Whenever you engage with your prospects and customers, remember that each of them is a person.  Connect with that person, and you unlock a host of possibilities.  In the book Humans are Underrated, Geoff Colvin points out that humans developed a big brain to handle the intricacies of social interaction.  So use yours to your maximum advantage!

A version of this article first appeared on the blog at Saleshacker.  Check it out (along with lots of other great sales content) here.