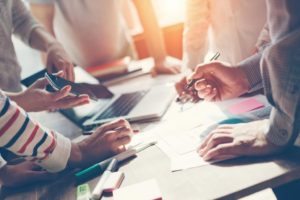 I came up in a sales world that exalted individual effort.  You lived and died based on your personal work and initiative.  The more you could hustle and get in front of people, the better.

But that sales world is evolving quickly. Prospects have access to more information than ever before because of technology.  The buyer’s journey is becoming more complex.  It can be harder to get our prospects’ attention when they are being bombarded by social media posts, emails, and every other form of digital communication.

Adapting to this new world of selling requires a different approach, and it’s one that I learned from the marketing world.  In fact, the distinction between marketing and sales is fuzzier than ever these days.  For example, social selling and content marketing both depend on sharing content strategically with an audience. The only difference is where that audience is in their buying journey.

So even though I started as a lone-gunslinger salesperson, I’ve found that there are better ways forward.  And all it took was a content marketer from Chicago and a rapper from Miami to teach me. 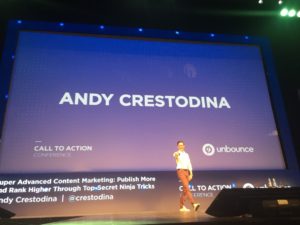 Andy Crestodina is a big deal in the marketing world.  As one of the founders of Orbit Media, he’s become a sought-after speaker and influencer.  It helps that he’s super-smart and super-generous.  But I’m in his debt because he taught me a little trick at a workshop in Chicago.  It was a concept that showed me how to take my message to the next level:

It was a simple suggestion to work with others when creating content like writing blog articles, making podcasts, or creating videos.   He was talking about marketing, but since marketing and sales are more closely aligned than ever, it translated over to my sales work.  Because in the new social selling environment, salespeople have to be guides for their prospects, and the ability to share useful material is critical.

Here were some of the reasons it made sense to me to collaborate:

1. You make better stuff.  When you work together with other experts in your space, the end product is improved.  Having more than one perspective creates a deeper and fuller experience for your audience, and it’s usually easier and faster to make.

2. You borrow their audience’s attention for a few moments.  In a world of content overwhelm, it’s hard to get access to new eyeballs.  When you collaborate, you have the opportunity to get in front of new people because you are borrowing your collaborator’s credibility for a few moments.

3. You have more fun.  It sounds obvious, but when you work with others, you don’t have to do everything all alone.  It’s a great excuse to reach out to others to build new relationships, and even new friendships.

Collaborating is the Short Cut to Influence 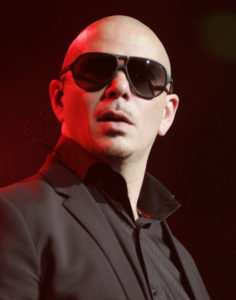 When I first heard this idea, I realized that there was another great salesperson who had used this tactic: the entertainer Pitbull.  Whether or not you are a fan of his music, you’ve probably run across him.  He’s everywhere: from the radio to New Year’s Eve specials to liquor commercials.  He’s built an entertainment empire, and how did he do it?

I’m sure he worked hard in his career (mostly in obscurity) before he started tag-teaming with everyone who would let him.  But a collaboration with Lil Jon turned into work with Jennifer Lopez, T-Pain, Prince Royce, Ricky Martin, Enrique Iglesias, Gente de Zona, Cypress Hill, Usher, Shakira, and so many more.  His discography lists 79 collaborative singles and 59 guest appearances on songs.

Even a partnership with a brand like Zumba Fitness proved incredibly powerful. It gave him an opportunity to connect with a market of 15 million people worldwide who already liked Latin-flavored pop music.

Especially when he was newer, Pitbull’s appearance on songs with more popular artists lent him an air of respectability.  “He must be someone to pay attention to if he is on x‘s song”, is the thought process.  Then as he became more known, his collaborators continued to allow him access to new audiences.   So at each step he was able to parlay his partnerships to create more access, credibility, and thus opportunity.

It’s a lot easier to sell music downloads and concert tickets with someone else’s help.

You might not be looking to become the next pop superstar. But think about the hard work of selling a product or service: getting people’s attention so that you can talk to them, building value, and then establishing the credibility to close the sale.  You don’t have to go it alone.

There might be an internal team of other salespeople and marketers that you can tap into.  Or if you work in a small organization, or for yourself, you can connect with other professionals in your field.  Even if your collaborators aren’t more “famous” than you, they will be well-known to their specific audience.  That credibility rubs off on you.

And vice versa. You will be able to support them in their work as well.  When done right, sales and marketing is a creative endeavor.  When you partner with others to make content and share your message, everyone increases their influence.

You don’t have to become a household name, just a name known by all of the households in your target market.  Why try to get in front of them by yourself, when you can get help?

To paraphrase Pitbull, it’s the easiest way to go from negative to positive.

A version of this article appeared on LinkedIn’s Marketing Solutions Blog.  You can check it out here!