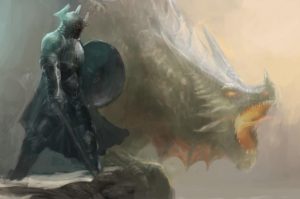 I always wanted to be a dwarf warrior.

It makes sense that the nerdy, not-really-athletic, 12-year-old me wanted to be a strong, badass adventurer when I played Dungeons & Dragons with my cousins.  Since I was never one of the popular kids, I had a chance through role-playing games to stretch out my imagination and try on different personas.  I could learn how to work with others and how to problem-solve.  And I got to feel powerful and in control (which are feelings usually lacking in adolescence).

I was reminded of my role-playing adventures in grade school while watching the Netflix series Stranger Things.  The show revolves around a band of middle-school friends; the outcasts that hang out in the basement delving into labyrinths and battling the denizens of the deep.  Yep, I remember doing that.  And what a wonderful opportunity it was.

Getting Too Focused on the Make-Believe

I’m glad that I had the chance to play Dungeons & Dragons when I was younger.  In fact, I have friends who still get together to run D&D campaigns.  And if I could pull my nephew away from his Xbox, he might be at the point where he can appreciate a Saturday afternoon adventure.

It was actually while playing an computer role-playing game that I realized the downside of focusing too much on your make-believe.  (And we all have it, whether it’s playing D&D, Farmville, or Fantasy Football).  I was grinding to help a character get better at dancing in the game.  That’s not a problem in itself, but at the same point in my life, I was also trying to learn how to swing dance.  So instead of developing a real-world skill, I was spending time to get my in-game character to be “good” at dancing.

That’s when I started to realize that there had to be a balance.  It’s OK to have an escape every once in a while.  It’s OK to have a place to try on different characters and explore new realms.  But unless you translate that into the “real-world”, life will just pass you buy.

Our fantasy worlds don’t have the negatives associated with the real world.  They don’t have the hard-work, the tedium, the failure, the malaise, or the rejection.  So we get lulled into the promises of excitement and adventure without the downsides.  But if we spend too long there, we find a lot of empty promises.

So have your escape, whether it’s role-playing games, video games, fantasy sports, or diving into the made-up world of your favorite television show.  But be aware that the best work you are going to do is here in the world of the real. Hone your creativity and bravery there, and bring it over here.