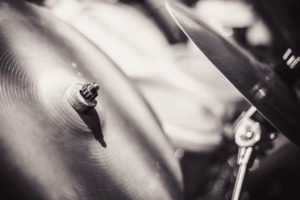 That was a quote written in black Sharpie on one of my cymbals when I was playing in a band.  I wrote it there because that was the energy I wanted to bring to our live shows.  And our shows reflected that ethos.  They were high-octane dance parties (even if there wasn’t anyone at the show – we were more than happy to entertain ourselves).

It’s how I saw myself as a musician.  It was the image in my mind that I tried to live up to.  It’s how I self-identified.

There was nothing wrong with that self-image, but when I listen to old recordings of our shows, I can also see how it limited me as a musician.  When we played live, I was usually playing too fast.  We had great song writers in the group, but so much of it was lost because we played 20% faster than we should have.  And as the drummer, that was 100% on my shoulders.

If you had told 24-year-old me that I should slow down a bit and feel the music, I think it would have fallen on deaf ears.  My identity was wrapped up in the zaniness onstage.  It’s only now with a decent amount of distance that I can see how much better it could have been.

Change Your Approach by Re-Evaluating Self-Image

If I started playing out tomorrow, it would be important for me to re-think my image as a drummer.  It’s the only way I could grow and improve.  And that re-evaluation is hard to do.  We cling to the ideas that we have of ourselves even when they don’t support us anymore.  We definitely dig our heels in and defend our self-identity when someone tries to point out that it doesn’t work anymore.

As I’ve been talking about Hyper-Connected Selling in the past few months, I’ve been very aware of the sales people who bristle at the idea that their world has evolved.  There’s a vocal contingent that doesn’t want to acknowledge that the way people buy has changed.  These are the ones that jump on social media posts suggesting cold calling isn’t very effective anymore and yell long and loud to defend the old ways of doing things.

Because for them, it’s not about the understanding the changing sales landscape, it’s about defending their identities.  And then they are stuck.

Think of the last time someone challenged you and got your defenses up.  Were they on to something?  Ask yourself if the things you identify with are still serving you. The answer might be yes.  And if not, maybe it’s time to re-think that picture in your head.