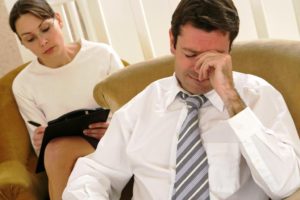 Are you nervous to reach out to prospective sales prospects and partners?

Does the idea of making sales calls conjure uneasiness or even a touch of dread?

Do you stand in the corner at networking events or industry conferences, just waiting long enough so you won’t feel too guilty when you duck out early?  Or do you find excuses to skip them altogether, even though you know you want more people to engage with?

You’re not alone. Many salespeople, in fact, many people, avoid taking the first steps to start new relationships.  It stems from an emotional lesson that we learn when we’re young and that continues to influence our behavior into adulthood.

Unfortunately when we were younger, most of us found that when we reach out to someone new, there’s a chance they might reject us.  At best it is uncomfortable, and at worst it can be a painful experience, and we learn to do our best to avoid the possibility.  Even though there’s nothing that’s linking our past to our future relationships, we steer clear of starting new conversations, because we don’t know what will happen.

However, if you can learn to identify and manage this fear, you’ll be on the path to massive success in sales.  And we can see ways to do this through the lens of the new digital communication platforms, i.e. social media.

How Social Selling Can Help or Hurt

One of the most challenging parts of selling has always been creating and developing new sales relationships.  With the changing landscape of digital communication, there are many more opportunities to start sales conversations…if you use the tools wisely.  Social selling can be a great way to reach out to more people and engage with them, or it can be an easy way to hide.

A lot of old-school sales trainers hate hearing about social selling because they feel that it reeks of cowardice. They think that using social media as a way to start relationships is a hiding behind technology.  They argue that sending a tweet or a LinkedIn invite is just a stall tactic. In their opinion, you have to be willing to reach out and start a conversation with everyone who could conceivably be a prospect.

Or rather, they’re kind of right. Since a critical part of your role in sales is starting new relationships, if you aren’t generating new conversations, you’ll struggle.  Whether it’s by cold-calling, hitting the trade show floor at a conference, or reaching out to people through social media, it’s important to start new relationships.   But here’s the rub:

It’s not hard work like digging a ditch is hard work, but it requires a lot of effort. It can be nerve-wracking to reach out and start a conversation with someone you don’t know.  The reason it is such hard work lies mostly in a psychological lesson that has been driven home since our childhood. 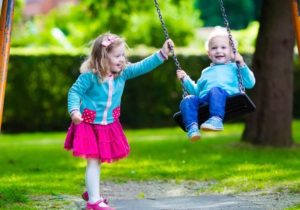 If you look at a young child, maybe 3 or 4 years old, they don’t have any social fear.  They will go up to anyone and start a conversation.  They meet a new kid at the playground and they’ll reach out and make a friend.  Pretty soon they’ll be running around the swings playing tag.

But at some point they meet someone who isn’t nice to them.  They try to start a conversation and the new person rejects them.  Maybe they even snub them and walk away.

That doesn’t feel good.  It continues to happen some more throughout their childhood.  And then maybe they get to middle school and their crush doesn’t return their interest, or the table of cool kids in the cafeteria won’t let them join, or they ask a girl to the homecoming dance and she says no.

All of these experiences get added to a mental and emotional piggybank that is labeled, “Times I was rejected and I felt vulnerable and sad and lonely.”  My guess is that you have one of those piggybanks for yourself.  (You don’t have to admit it to me, because that would just compound the vulnerability.)  But it’s there. 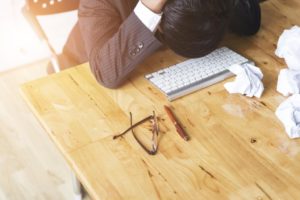 Fast forward to adulthood.  Now you’re in sales and you have to reach out to prospects to start a sales conversation.  And you don’t want to do it.  Because every time you think forward to the upcoming conversation, the memories of those past rejections pop up.

I once saw a sales rep stare at a phone for an hour.  Seriously, a whole hour.  He had an unfortunate combination of intelligence and imagination that let him visualize of all the “bad” things that could happen when he made calls to set up sales appointments.  He could picture all the rejection and failure (and accompanying negative feelings).

It didn’t matter that he was, in actuality, a very skilled rep who had great success whenever he worked.  Overall, people really enjoyed working with him and there was a lot of positive results that came about every time he picked up the phone.  But he’d get stuck on the internal negative narratives.

He was my first encounter with the block of “analysis paralysis”, when our thinking mind becomes a hindrance instead of a help.  It’s when the sales rep thinks about all the negative outcomes of an action, or won’t take action until they feel they know everything.  It also happens a lot when salespeople spend hours and hour poring over their sales/production/revenue numbers… instead of reaching out to people.

Are you doing anything else you can find, instead of reaching out to new people?  You might be suffering from procrastination driven by analysis paralysis.

Lots of sales trainers will tell you about their methods, tools, and tricks to get past this “call reluctance”.  But at it’s heart, you have to acknowledge the emotional, and irrational, nature of analysis paralysis.  You can muscle through these issues in the short-term, but it takes a lot of energy.

Or you can create awareness around these fears that create your own analysis paralysis.  You can find ways to develop your inner confidence, and build pictures and narratives that reinforce the positive experiences that you have when reaching out to new people.

Your fears are real, you can’t just think them away.  But you don’t have to be held hostage by them either.  Social selling doesn’t have to be a crutch, rather it can be a useful tool in moving past your personal fears.  When you can get past your own internal hang-ups, you’ll be able to reach out to more people more comfortably, confidently, and effectively.

Which will lead to more relationships…and more sales!