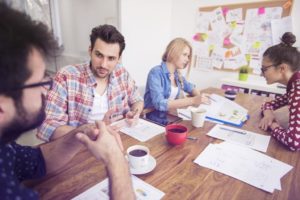 One of the most under-appreciated drivers of your career success comes from your professional relationships.  Most people think networking is just something you do when you are trying to land a job.

Those people are missing the boat!

Networking isn’t just a bunch of salespeople sharing bad appetizers in a hotel ballroom.  It’s not trying to schmooze the boss for preferential treatment.

Approached correctly, networking is about connecting with other people so that you have access to the information, resources and support that you need.  An effective network at the office helps you do your job more easily, effectively, and efficiently.

When you work for large company, your internal network of your peers and colleagues is one of the most important group of relationships you can cultivate.  Unfortunately, I see some egregious mistakes happening over and over again when people approach networking in the workplace.

These mistakes lead to thousands of hours of lost productivity and millions of dollars of squandered resources.  Here are the top three mistakes that are damaging you network:

I love technology. I love how it has multiplied our communication options and allowed us to connect with others around the world.  When I think about networking, I can think of a truly global network these days.  So every time I hear about someone sending an email to the person down the hall, I cringe. 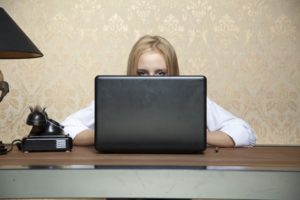 Too often, people use email and texts when they can and should be speaking in person.  It seems easier.  It seems safer.  It takes less time.  All of these sound like good reasons to shoot an instant message instead of talking offline.

But all communications methods are not created equal.  The research shows overwhelmingly that face-to-face conversations are more powerful, lead to less misunderstandings, and create shared empathy.

Whether it’s a great idea, or some important feedback, if you want to connect with someone on human level, talk to them in the real world.

Talking to the same people everyday

When you were in high school, did you sit with the same people at lunch everyday?  I did.  I can still remember their faces.  And in the emotionally tumultuous world that is high school, it’s OK to have a core group of friends that support you.

But then you graduated and you made some new friends.  And you probably made new friends when you left college.

It’s natural and normal to have a relatively stable group of people that you interact with on a daily basis.  But if you are only talking to these people at the office, you are missing out.  Making new friends is something you have to be intentional about in the workplace.

The people you see everyday know the same things you do and have the same perspective.  Mixing up who you engage with can open up new and interesting opportunities.  Sociologist Mark Grannoveter calls these “weak connections”, and they are the bridge to other areas of information and support in the organization. 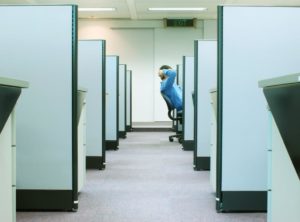 Look for ways to talk to the person beyond the next cubicle.  If your office has a cafeteria or snack area, say hello to someone you don’t know when you’re getting your afternoon coffee.  Look for a chance to get involved in a volunteer project or after-work activity that will introduce you to people you don’t usually see.

Imagine walking into a project meeting with another department only to see a friendly face in the room.  Maybe someone you played trivia with after work, or someone who you had a conversation with at lunch.  That’s the value of expanding past the people you see everyday

Asking for Help Before Giving Help

It can be hard to measure the ROI of networking at the office.  Because it’s hard to quantify, it can be easier to just sit back and wait until someone helps you before you build a relationship with them.

Networking relationships are built on the same foundations as any human relationship, and one of the most important pillars is reciprocity.  Providing reciprocal support is one of the ways that we strengthen the bond between us and those we spend time with.

It can be daunting to take the first step.  But the more you reach out to others to help, the more likely you are to create trust.  The more relationships you have started, the more people you can approach for help (that actually want to help you).

If you just want to “take” from your coworkers, the well will run dry fast.  If you look for ways to give to the people around you, you will always have a steady stream of people wanting to help you.

I’d be willing to guess that you are making at least one of these mistakes at the office.  You don’t have to change everything right away to see a positive impact on your network.

Think of one area where you have been sabotaging your network, and plan out one simple activity you can do tomorrow to change it.  Keep focusing on taking small steps and your relationships at the office will be vibrant, dynamic, and valuable!