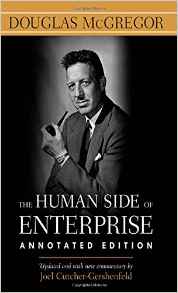 “There’s nothing new under the sun.”  You might have heard that aphorism before.  I think about it every time I see another new leadership book that promises to uncover the true secrets of organizational success.  At fifty years old, you won’t find anything new in The Human Side of Enterprise.  You will find some solid thinking about some of the timeless principles that guide organizational success.  Way before getting an MBA was trendy, Douglas McGregor was approaching business as a science.

“All managerial decisions and actions rest on assumptions about behavior.”  If you assume that people are lazy and unmotivated, you will be forced to work through carrots and sticks.  If you assume that people are capable and looking for opportunities to engage, you will create collaborative opportunities.  How you lead and manage flows how you perceive the inherent nature of people.

Is managerial leadership a property of the individual, or is it a term for describing a relationship between people Click to Tweet

In a world full of MBAs touting their latest theories and flavor of the month business books, The Human Side of Enterprise is a solid foundation on the strategies of business leadership.  I don’t think it’s for everyone, but if you are working in a large organization, or tasked with creating organizational change or development, it’s well worth the read.