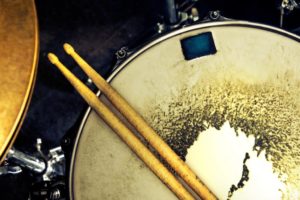 I tell people that I’m a self-taught drummer, but that’s not quite true.  When I was twelve I had about 3 “lessons” from my Uncle Tommy, who was a wicked good drummer.  He was my mom’s brother and like all of her siblings (9 of them), he had played in drum corps growing up.  Even as an adult, he continued to play in marching bands and he was fast, precise, and tight.  All great things for a drummer.

He stood me and two of my cousins at a 2×4 balanced on kitchen chairs, and he taught us how to hold a stick, how to count time, and what a paradiddle is.  We only met a few times before the busyness of life discontinued our lessons, but it must have touched a chord in me (pun intended) because a few years later I bought my own drumset with paper route money and music would become an integral part of my life.

My Uncle Tommy passed away a few weeks ago.  It was an unexpected heart attack and the only good thing about it was that he was laying on a beautiful Caribbean beach when it happened.  But at his wake, I found that my drum lessons were only one of the many times that he reached out to teach and support others.

It made me think about the impact that we have on others, about what our “legacy” really is.  Too often we buy into this idea that we have to be important and famous to influence the direction of people’s lives.  Really, though, it’s usually a simple conversation, a shared idea, or a drum lesson that has the biggest long-term impact.

Whether we’re talking about business or life, you never know when you are going to influence the journey that someone is on.  You might not see the effects yourself for years, if ever.  But they’ll be there.  Every interaction with someone could be the one that puts them on the path to their future, so every one is important.  What a great reminder to be intentional and mindful.  That’s the real lesson here.

And thank you Uncle Tommy, I hope you’re somewhere whispering in the ear of a kid trying to figure out the right way to play a cadence.