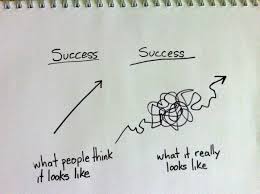 One of my favorite posse cuts is the song North by Northwest by a lesser-known group out of Seattle called the Blue Scholars (a posse cut is a hip-hop song which features 4-7 verses by different rappers – the whole “posse” is in the song).  One of the verses is from a guy named Macklemore.  You might have heard of him.  His song Thrift Shop has 881,134,271 views on YouTube and he won the Grammy for Best New Artist in 2014.

…Which is ironic, because this posse cut is from 2007 and he started releasing albums in 2000.   That’s fourteen years before his “new artist” designation.

I’m not here to question the Grammy’s idea of new, but I want to point out that when Macklemore contributed his verse in 2007, he didn’t know what his career would turn into.  He didn’t know the effect that talent, hustle, and luck would have on his future.  He just kept making music.  And looking back, that song is as much a part of his story as anything else.  Just like his first LP, meeting his partner Ryan Lewis, or making a demo tape that never saw the light of day.

Right now, you might not be making an album, but you are building something: a career, a portfolio, a family.  What you do today is part of your story.  When you look back, this work will be a building block of the future you created.  It may not always feel like it in the moment, but remember that it has value and power.  Don’t gloss over what you are doing right now, embrace it as part of your story.

I saw an actor named Clark Gregg do a 2-episode arc back in 2001 on a television show called Sports Night that was cancelled right after.  He also made many 1- or 2- episode appearances on other TV shows, but I didn’t see those.  I wouldn’t see him until 10 years later when he was Phil Coulson in one of the most popular movie franchises of all time: The Avengers.

But he couldn’t know that was where he was heading.  All he could do is put effort into his career and keep plugging along.  Each of those gigs was an integral step in the path to his present and into his future.

What you are doing today, big or small, is part of your narrative.  You are in the middle of your story.  Embrace it.  And enjoy the journey.