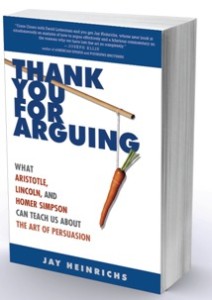 When I was in high school, I sat at a lunch table with a bunch of really smart kids.  I don’t know if you would call us nerds, or dorks, or whatever, but we were the ones who were in all of the AP classes together, and Latin, and calculus, and, well, you get the point.

But we were still teenage boys which meant that there was a lot of testosterone and arguing at that table.  This confluence of brains and competition meant that you were judged in no small way by your ability to engage in debate and hold your own.

Oh, how I wish that I’d had this book then!  But failing my invention of a time machine, Thank You for Arguing is still a fantastic resource to use today to understand and hone your rhetorical skills in our everyday lives.

Developing an understanding of the tools of rhetoric can elevate your ability to influence others and protect you from being manipulated.  On a larger scale, if everyone had these skills, our modern society would be better off because deliberative argument is a key piece of a dynamic and involved citizenry.

Thank You for Arguing is a engaging look at rhetoric, the study of how to effectively persuade others in speech and writing.  It’s as good a modern textbook as I’ve found, and I wish that more people would study the subject.  As they say, a rising tide raises all ships.  If we all knew how to construct better arguments, the world would be a better place. But you should definitely read this if you are: