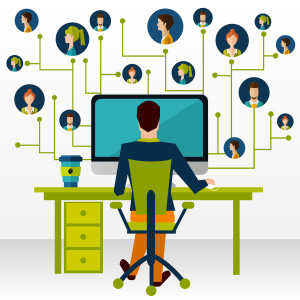 For many, it’s a nebulous concept that seems “out there”.  Sure, it sounds like a good idea.  Creating connections and relationships and somehow getting those people to help you with your career, that’s all good.

But what does networking really look like?  And how does it manifest in real results?  If someone isn’t a hiring manager or a potential client, how can they help you with your career?

I recently launched a new podcast called Beer, Beats, & Business.  As a solopreneur, I don’t have an internal team that I can call on when I want to work on a new project.  I have to do it myself…

Or I have to find help.

After the first episodes of the podcast hit the internet, I reflected on the steps along the path.  I realized how integral my network was to realizing a successful project.  Here are the ways my network helped me start my podcast.  By the way, this doesn’t even include all of the encouragement and support I received on the journey.

The inspiration for Beer, Beats, & Business didn’t just pop out of the ether.  I had been intrigued by the idea of doing a podcast for a while.  I was a guest on other people’s shows and I’m always on the lookout for new ways to create and share content.  But I couldn’t conceptualize what my show would look like.  Then, during conversation over the grill with my friends Rob, Brian, and Ian, the idea of talking about hip-hop, good beer, and business popped up.  (That might have been because that is exactly what we were doing).

It would still be almost six months until I decided to take action on the initial idea.  Bouncing the idea off of other people was critical.  Instead of mulling it over in my own mind, I was able to find sounding boards in the other successful professionals in my network. I had many conversations with people about the podcast, and I can remember specifically talking to Brad, John, and Rebecca about the show.  It helped solidify the direction I wanted to go and also steered me away from some bad ideas.

When I decided that I wanted to move forward with a podcast, I knew that I wanted a sharp logo and cover for the project.  For me, having something “real” like a logo makes it easier to share the idea with others.  Over the years I’ve met a number of independent graphic designers, and I can tap into their talents when I need them.  Abi Worthington at Barefaced Design used to be in the leadership of the Young Professionals of Evanston with me.  She’s also a fantastic designer who does amazing work.  A few phone calls, a couple of emails, and two weeks later I had amazing promo material.

Learning the Ins and Outs:

I read a lot of articles about how to put together a podcast (Google “how to…” just about any topic and you’ll get thousands of results).  But it’s always better to be able to talk through the process with someone.  I had been a guest on Ryan Rhoten’s successful podcast, The BRAND New You, and he had also released an episode on how to podcast.  I sent him an email asking a few questions and he generously had an extensive phone conversation about all of the podcasting tips he had picked up.  It saved me hours and hour of trial and error. 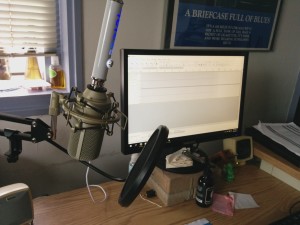 I met Blane Warrene almost 5 years ago when we were both speaking at a financial service conference.  He eventually collaborated on a few projects with the start-up firm I was consulting with, and we hit it off.  (Easy to do because he’s smart, down-to-earth, and a musician).  He has his own podcast and when you combine that with his music background, he has a solid understanding of audio equipment.  He gave me great guidance on the logistical set-up I needed for the podcast, and suggested a sweet mic.

When you do an interview-style podcast, one of the challenges can be finding people to be on your show.  This can be especially challenging when you are just starting out and don’t have a “brand” to share with potential guests.  This is where my network proved incredibly valuable.  I was able to reach out to a wide variety of talented and interesting people from a range of industries and activities for the show.  And they said yes!  I have enough people scheduled for the first season and into the second already.

People mistakenly think that your networking has to be “professional” and should stay separate from your personal life.  Big mistake!  If you’ve heard the show, you’ve heard our awesome announcer/bartender.  That’s Colette D’Antona, a super-talented stage and voice-over actress who just happens to be one of my best friends from college.  She classes up the show and makes it sound like I know what I’m doing.

Sometimes your network surprises you and you get help when you didn’t expect it.  I had resigned myself to doing the post-editing of the show myself.  I had personally recorded my audiobook and I had some recording experience from my band days, so I knew I could make a passable show.  But probably only passable.  When I shared with my network that I was working on the podcast solo, I was introduced to Tom Couch who is a radio veteran who wanted to get some podcast experience.  Holy cow!  Everything you hear on the show that sounds slick…that’s all Tom.

The interesting thing about podcasts is that people don’t tune in to a station and find you, they have to intentionally download your show.  So promotion and marketing is important is incredibly important.  All of my promotion so far has been to and through my network.  Using mostly social media, I’m able to reach out to thousands and thousands of people with each episode. That would only work if I had a network of people who have opted-in to me and what I’m sharing.

That’s a lot of outside help.  I don’t think it’s an understatement to say that if I hadn’t cultivated a network over the past decade, Beer, Beats, & Business would never have come to fruition.

Focus on cultivating your network today so that you can see the rewards in the future.

You might not be starting a podcast, but maybe you want to get a job, write a book, learn a skill,  hold a fundraiser for your favorite charity, or start a new business.  Going alone is hard and, well, lonely. Let the people around you help.

However, the lesson that stands out to me isn’t in the support that my network has provided, but in the fact that these relationships have been built over the past two decades.  True networking is about relationships.  It’s not a short term endeavor.

The real takeaway: Focus on cultivating your network today so that you can see the rewards in the future.