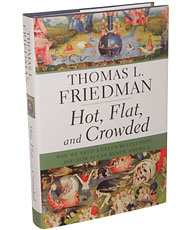 This article was originally published on January 9th, 2009.  The global situation hasn’t gotten any better…

Go read this book.  Right now.  Then we’ll talk about it.

OK, now we can dive in.  There are few books that I’ve read in recently that have affected me as strongly as this book.  A few years ago, I read Thomas’s The World is Flat and found that it was thoroughly researched and its arguments relatively sound and well-presented.  He does the same thing in Hot, Flat, and Crowded, and the topic is much more critical then just economic globalization.

In the course of my lifetime (32 years) I’ve watched the idea of being “green” transition from something only aging hippies cared about to something that even big companies are chasing.  When I look back on my life, I think it will be one of the defining challenges of my generation.  I personally feel that the time to act is now, and that we can’t ignore the massive effects humanity is having on our home planet.  What’s exciting is that we have the opportunity to create change – and we must.

The massive changes in social and cultural lifestyles since the Industrial Revolution, accelerated by the modernization of India and China, are threatening to destabilize the viability of our home planet.  The United States has an opportunity to harness it’s natural creative and entrepreneurial energies to devise the technology and systems to find solutions to these problems – but only by creating a unified political and economic structure to nurture that process. (Whew, that’s a big thought!)

Go back and read the first line.  Why do I think you should read this book?  Because the more intelligent, articulate, motivated people we have focused on this challenge, the more likely we are to be up to that challenge and that’s a good thing.  I love a quote that Thomas uses at the end of the book: