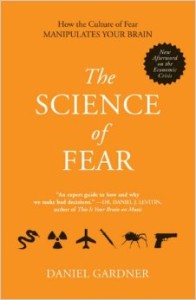 This article was originally published on March 2nd, 2009.  Unfortunately, fear hasn’t disappeared in the last 5 years…

We all understand fear.  Even if we can’t clinically explain what fear is, we could tell someone what makes us afraid – and we could come up with that list quickly.  It would be easy to explain how it affects us physically and emotionally.  But what really causes fear, and why does it seem that when we are safer than ever we are more afraid than ever?

Based on the title, I was expecting the Science of Fear to examine the inner workings of the mind – the neurobiology and physiology in the brain.  What I got was something quite different, but equally as valuable.  Daniel Gardner synthesizes the current research on how humans make decisions and analyze risk to create a picture of how we judge the threats in our lives.  What he found is that not only are we biologically inclined to gravitate towards fear, but that there are a lot of people and organizations that use that inclination to influence our decisions.

The human brain is wired by evolution in a way that makes us unconsciously susceptible to fear in our decision-making, which often leads us to make inaccurate risk assessments in our personal lives and as a society.

Yep.  In a society that is saturated by people telling you to be afraid, it’s important to understand why we are so susceptible to their fear-mongering.  Fear won’t go away, but it’s important to put it in its proper place.  As Daniel concludes: only by learning how to “think hard” can we protect ourselves from “unreasoning fear. (pg 296)