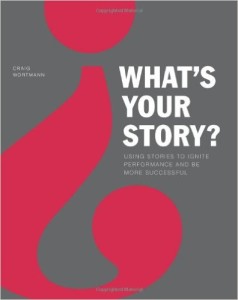 Every once in a while you meet someone and you think “Why haven’t we met earlier!?”  Craig and I were actually introduced by a mutual friend and we share a similar outlook on how to be successful in business.  And he knows his stuff – he’s a professor at the University of Chicago (while not quite at the level of my alma mater Northwestern, it’s still a pretty good school…).  In fact, I knew that I would like his book right away because he used the term Luddite in the opening chapter of What’s Your Story?.  I thought I was the only person geeky enough to put that in a business book.

Stories are a powerful leadership tool that have more and more relevance as we are increasingly bombarded by massive amounts of information with less and less context to understand and digest it.

Stories are how humans communicate.  Story-telling is not a business skill, it’s a life skill.  Too often, professionals think the path to influence and authority is lined with PowerPoint slides and spreadsheets.  But I think that the leaders of the future are going to the ones that can take the information overload and help their teams see the meaning behind all of the information.  Craig has outlined steps to making story-telling a powerful tool for anyone.  People who will get a lot out of this book: