It’s been awhile since MC D. Fish took to the stage to rap, but I had the chance to do so a few weeks ago while in Austin.  I was invited to DellWorld as one of Dell’s Social Media Influencers, and we had an event at a local bar where we were entertained by a banjo/guitar duo called Redneck Hummus (you can’t make that up).  They were doing fun covers, and when they cracked a joke about the Humpty Dance, I volunteered my services.  After chatting during the set break, I joined them for a few old school hip-hop tunes. 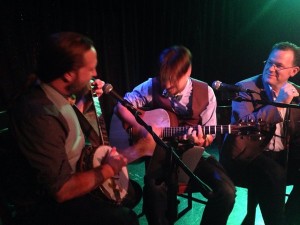 It was ridiculously fun, and I had an interesting conversation afterwards when someone asked me how I remembered all the words after more than 10 years.  I admitted that I took a few cues from the lyrics I pulled up on my phone.  But mostly, I was able to remember because back in the day I had performed these songs constantly.  They had embedded themselves deeply in my brain.

Here’s a thought.  Just like I can access knowledge and skills from the past here in the present, whatever I’m doing constantly right now is likewise getting embedded in my brain.  I will be able to access it years in the future.  That’s a powerful reason to put my attention on useful and valuable information and activities, and not just fluff.

Based on where you are focusing your thoughts and actions these days, what will your future self be able to tap into?