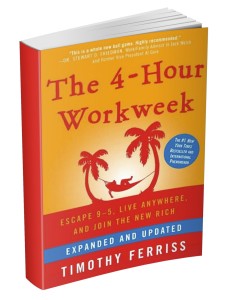 This article was originally published on May 9th, 2008.  This was before Tim was the household 4-_____ name that he is today.  It was the first time I encountered a lot of these ideas.  They’ve been hugely influential – as I agree with some of them more and more…and disagree with others more and more.  In my mind, that’s the hallmark of a good book!

I’ve read the 4–Hour Work Week twice now, in detail.  The first time I read it I was so blown away that I had to put it down, digest it, and then come back for a second go.  I think I was checking to see if I would still think it was great – which I did.  Timothy is basically starting with the premise that the way we work, the 9–5, forty year grind, is rarely in alignment with what we want to get out of life.  His goal is to show how to live like the “New Rich”, a group of individuals he feels shares common goals and lifestyle choices – such as working less hours, but being much more productive with that work time, and living a full life in the present instead of delaying it until after retirement.

The 9–5, forty year grind is rarely in alignment with what we want to get out of life

Don’t get me wrong, this book doesn’t have all the keys to living the idyllic life.  I have to say that I think there are parts of the 4–Hour Work Week that are completely brilliant and that other parts are horribly and painfully wrong.  I found that there were three types of ideas in the book: 1. Ideas that fired me up, 2. Ideas that initially put me off because they challenged me to get out of my comfort zone (which I think is good), and 3. Ideas that I think just don’t work.  This doesn’t detract from the book -actually it’s one of the most important things about it.   You learn from the books you disagree with just as much, if not more, than the ones you agree with.

Absolutely yes.  There is something here for everyone to learn.  Different people will definitely be attracted to different parts of the book; but I feel that Timothy elucidates some of the main obstacles that people run into when they are trying to break out of the “rat race” (and how to avoid them).  I know that this is a great reference book for me to have in my library, and I suggest you put it in yours as well.