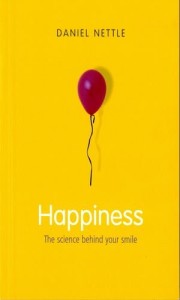 This article was originally published a few years ago at the RockStar Success Library. And who doesn’t want to be happy?

It makes sense that if the world’s philosophies and religions have been examining happiness for the past few millennia, it’s fair game for the psychologists and neuroscientists to take a whack at it.  It seems a little ironic to take a “scientific” look at happiness, considering how subjective the idea of happiness really is, but Daniel Nettle does a great job looking at the psychology of what happiness is and what causes it.  In the end, an examination of happiness is really a way of examining what motivates us as human beings.

Sure.  I don’t think you have to drop everything you are doing and go get it, but it is interesting.  If you spend a lot of time being really happy  already, I don’t think this is going to help you much.  If you struggle with unhappiness, and keep wanting to be more happy, this will give you a great starting point to describe what you are actually trying to accomplish.