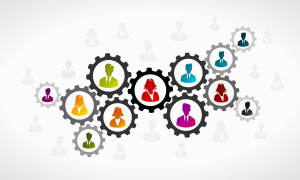 What kind of networker are you?

In my experience, people fall into one of two categories.  It’s an incredibly important distinction.  The professionals in the first category put in an enormous amount of effort and still fail miserably at building their network.  Those in the second find their careers blossoming because of their business relationships.

The first type is the transactional networker.  People that follow this philosophy see networking as a series of brief encounters.  And the goal of each encounter is to get something from it.  These are the people at networking events who pass out as many cards as possible and collect as many as they can.

They are on the hunt for those that can use their products and services right away, or know someone who can.  They’ll help other people out but only if they see it leading to mutual back-scratching.

This isn’t because they are bad people.  It because they haven’t been taught any other way.  They read a book or heard from someone that networking is about meeting as many people as possible, so they are doing just that.

Transactional networkers tend to ask for business immediately, and are often on to the next person if they can’t make a direct business connection right away.  They view networking as simply a numbers game – the goal is to talk to everyone so they can find as many prospects as they can.  This leads to a short term view of networking because they are in it for the here and now.

The relational networker takes a more long-term approach to their networking activities.  As the name implies, they are focused on building a relationship with the people they meet.

They find out how they can be of service to the people in their network and create strong ties by actively helping their contacts first, without expecting a direct referral in response.

These professionals find more long-term success through their networking because they view each relationship as an investment for the future.  As they get to know their network better and better, there are more opportunities for mutual benefit.

Because it’s not necessary for there to be payback right away, relational networkers are able to develop a web of connections in which each person is invested in the success of the others.

Getting Stuck in Transactions

Looking at networking as a relational rather than a transactional process is incredibly beneficial.  So why don’t more professionals take a relational approach to their networking?

You might think you are a relational networker, but in fact, most professionals treat networking like a transaction.

Most of us have two challenges: we think linearly and we think in the present.  It’s not that we don’t want to invest in our careers long-term.  We just have a hard time thinking on a longer scale.  It much easier to think about the here and now and to handle the challenges that we are currently facing, than it is to think and plan for the future that we can’t really see.

Most of us are wired to think about what’s going on now.  Our impatience becomes the biggest challenge to building a strong network, and we fall into the bad habits of transactional networking.

Our impatience is the biggest challenge to building a strong network

But this also shows the way out.  Don’t connect your success in networking to getting a direct payoff.  Rather, build strong relationships.  You’ll still be able to find solutions to your immediate problems, but you’ll also be setting yourself up for success in the future.

You’ll be poised to leverage the relationships that didn’t have a direct effect on your career when you first started them (as long as you put the time and energy into starting them when there was no obvious benefit).

By being aware of these pitfalls, though, you can focus on building your network the right way.  A farmer cultivates the fields for a huge payoff at the end of the summer.  In the same way, spend the time and energy to build your relationships and strengthen the ties to your connections.  When you do this you will find that networking will become a key part of your business development.