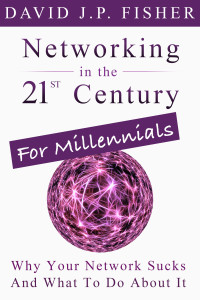 Networking in the 21st Century…for Millennials: Why Your Network Sucks and What to Do About It is out now! You can get it here.

If any of my work has helped you in the past, here’s an easy way to return the favor. Every single mention or download of the book on the launch day helps this new book find its way in the world.

How to help TODAY:

I’m using the hashtags #network and #millennial. Feel free to reuse, borrow, snip and edit these:

Twitter: New #book by @dfishrockstar, #Networking in the 21st Century… for #Millennials, : http://amzn.to/1yWBSTS

Twitter: New #book by @dfishrockstar, Networking in the 21st Century…for Millennials, get it #free today: http://amzn.to/1yWBSTS

Twitter: Does your #network suck? Here’s the fix new #book by @dfishrockstar, Networking in the 21st Century http://amzn.to/1yWBSTS

LinkedIn/Facebook: Professional networking doesn’t have to hurt for young professionals. David Fisher looks at ways to make your networking work for you in his new book: Networking in the 21st Century…for Millennials http://amzn.to/1yWBSTS

LinkedIn/Facebook: Hey Millennials – One of my favorite personal development authors has a new book out today. If you’ve struggled to make networking a valuable part of your professional life, get this book. It will help put you on the right path http://amzn.to/1yWBSTS

Reviews from Networking in the 21st Century:

“Networking — everybody has to do it, nobody has a good definition of what it is, and most people dread it. David Fisher is here to school you on what networking really is, what it can do for you, and how to make the most of it. Spoiler alert: He’s going to make networking sound like a lot of fun! This book banishes the glad-handing stereotypes and will increase your confidence AND your influence.”
-Daniel H. Pink, author of TO SELL IS HUMAN

“David uses a humorous, down-to-earth, and conversational approach to unpack the best practices for networking. I’ve been in this space for 10 years and I learned a thing or two!” Alexandra Levit, author of Blind Spots: The 10 Business Myths You Can’t Afford to Believe on Your New Path to Success and They Don’t Teach Corporate in College

“You’re holding a book that will make you way more efficient at meeting the people you need to be successful. D. Fish’s answers to the questions that plague professionals around networking are direct, easy to follow, and easy to execute.” Jason Seiden, entrepreneur and author of Super Staying Power: What You Need to Become Valuable and Resilient at Work

“David Fisher helps you to understand the obstacles that have kept you from creating a vibrant network in the past – and then shows you how to develop strategies to inform and influence your tactics moving forward. It provides the comprehensive blueprint most books on networking are missing.” Joey Davenport, President of the Hoopis Performance Network

Thank you so much for all of your help! I truly appreciate it!