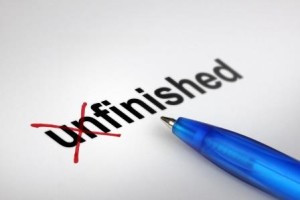 What does it take for you to get a project out the door?  At what point are you ready to let it out into the world?

I think we often hold onto projects for too long. It’s a form of fear. We think that what we’re making isn’t good enough and that if we just give it a little more attention then it will be really good.

You have to find the middle ground.

I had a powerful experience with this when I wrote my second book.  The first one, of course, took me a long time and I labored over it as only a new author can.  But then I put together my next one.

It was the first companion book to Networking in the 21st Century.  It was focused on young professionals and I started writing it in the beginning of February.  I was hearing that people were looking for actionable content that was pertinent to their specific situation.  I was able to put it out 4 months later.

I even impressed myself with how fast I got it out.  I found there was a trick to producing it quickly:

I mean, it’s very good.  But I know that if I wanted I could have polished it over and over for weeks and weeks.  There are always more tweaks to be made.  But in the end, the most powerful thing to do is put it out.  Since then, my mantra has been “done is the new perfect”.  Whether it’s a new book, article, or other content, my goal is to get it very, very good… then release it into the world.

To chase perfectionism is just another way to stay “afraid”.  If it falls down on its face, so be it.  At least it’s out there.  And it might just rock.  Instead of thinking perfect, what can you focus on this week so that it gets to “done”?