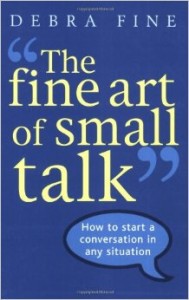 This article was originally published on December 26th, 2008. After writing Networking in the 21st Century, I find it even more relevant!

In working with clients on developing their communication skills, I’ve found that there are a lot of people who are nervous about their ability to hold a good conversation.  Many are scared enough to actually avoid talking to others in social situations.  They may feel comfortable talking with good friends, but chatting with new acquaintances or starting new conversations is way out of their league.

Debra Fine’s The Fine Art of Small Talk is a fantastic guide through the process of engaging others in conversation.  What’s great about the book is that it offers mini-scripts throughout the pages – lists of questions or statements that you can use to help you converse with others.  For someone who often searches for the right words to say, Debra tells you what to say and why you should say it.

A good conversation rests on engaging with another person and using questions to get beyond the superficial answers that stall the conversation.  Anyone, even if they are nervous, can do this if they are willing to be open and interested in others.

I think it’s a great resource for anyone who wants to feel more comfortable starting conversations with people they don’t know very well.  I don’t think the book has anything revolutionary – it is simply the basics explained very clearly.  And it’s a physically small book, so it will fit in your briefcase or purse so that you can take it along to glance at before your next social gathering.  Quite handy!