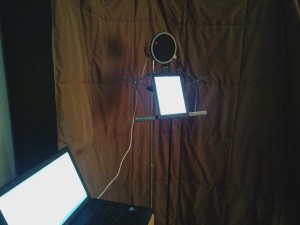 Last week I finished post-production on the audiobook version of Networking in the 21st Century.  I recorded and edited it on my own with a laptop, a microphone, and a corner of the living room turned into a mini sound booth.  It will be released in a few weeks, and I’m pleased with how it turned out.  It doesn’t have all of the polish of a recording done in an expensive studio, but it comes pretty close.

The process took me back to recording DIY demos with my old band.  We’d take whomever’s basement we could find that had absent (or relaxed) neighbors, throw in some mics and a 4-track recorder, and go to town.  If only we had the technology that exists today!  But we were creating and making something that we could put out into the world – and that’s what was important (and fun).

I kept that in mind while I was working on the audiobook and couldn’t get the levels just right or heard one more improper enunciation.  The goal wasn’t to be perfect; the goal was to put something out, something that can help people.  It wouldn’t do any good if I just “thought” about making it, I had to make it.  It felt good when I was putting the finishing touches on it.

What will you create this week?