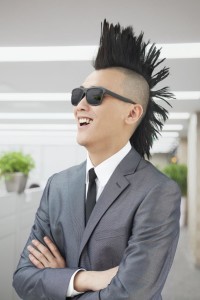 I learned all of my best networking strategies from punks.

No, really.  Back in the late 90’s and early years of the 2000s, I played drums in a ska band in Chicago.  You don’t have to know what ska is for the purposes of this story. But you do have to know that due to a weird historical hiccup in the 70’s, the ska and punk music scenes were inextricably linked.

So while my band had a horn section and suits, most of the shows that we played included at least a few other bands that sported lots of guitar distortion, combat boots, and mosh pits.

I’m often asked where I developed my networking chops.  Was it at business school, running for political office, building my first start-up in college?  Nope, it was at clubs like the Fireside Bowl and Metro in Chicago.  I was managing the band at the time, and I didn’t realize it, but I was getting a first class education in the power of business networking.

(By the way, the Fireside Bowl has since been gentrified into a very swank bowling alley, but in the 90’s it was an underground music Mecca.  It had music 7 nights a week with 3 or 4 bands from around the country.  It was also falling apart: nobody bowled, the bathrooms had a very unique smell, and the stage was randomly stuck in a corner by the concession stand. Ah, the good old days…)

I was learning from masters, and I didn’t even know it.  In fact, the kids in the punk scene didn’t know they were networking gurus either, they were just trying to put on shows and make 7” vinyl albums.  But I learned tools and ideas from them that are still a big part of my networking approach and that continue to influence me today.

1. Align your goals with your network

The punks that I met were passionate about their music and about their scene.  The goal wasn’t to get signed by a major label and play in stadiums.  It was to create and perform and build a community.  In fact, getting too big was often a ticket out of the scene (Green Day was famously shunned from the clubs they had played in once they released their breakout album).

We once headlined a show with 7 others bands.  And it was only 3 hours long!  We were supposed to have 2 openers, but the crowd was full of other bands and the promoter kept putting them on the bill for the night.  Our 55 minute set got cut down to about 20 minutes.  We played 7 songs as fast we could and it’s still one of my favorite 20 minutes of music.

The goals of the music scene in that town focused on inclusion, so it made sense to the promoter to add the others.

That might not make sense to you, but it worked for them.  You have to ensure that your network, and the community that you network in, has goals in alignment with yours.  When everyone is on the same page, it’s much easier to create better results.

Question: Do you know what your networking goals are?  Have you found a network that has others whose goals align with yours?

One Saturday there was a huge storm as we were driving to a gig in the booming metropolis of Kenosha, WI.  When we got there, we found that we were playing in a basement club.  That wasn’t a problem.  The problem was the club had partially flooded and shorted out the sound system.

It could have been game over, except one of the local bands, who wasn’t on the bill but had come out to support the show, offered to go back to their practice space and get their PA system.  They didn’t ask for anything in return, they just wanted to see the show happen.

It’s a common anthem among networkers that you have to give to get.  Instead of worrying about what you can get from others, look for ways that you can contribute to their success.  I call it networking karma, the more good you put into your network, the more you are likely to get in return.

Question: Where can you help a “show” happen without asking for something in return?

3. Fight your prejudgements of people and opportunities

As I said, my band played with punks all of the time, but that doesn’t mean I was one.  I didn’t have spiked hair, piercings, or tattoos.   I’m not going to lie, sometimes I would be in punk clubs and I’d be a little frightened of the guys with the tough-looking clothes and the tough-looking swagger.

And almost always, they were incredibly welcoming.  I don’t want to make it seem like they were saints, but underneath the tough demeanor they were like everyone else.  One of the nicest people I met while playing music was a promoter who had a rainbow Mohawk and approximately 20 piercings in his face.   After we’d met he went out of his way to make sure we were taken care of and talked us up to everyone.  He also introduced us to some other bands who would help us get gigs in the future.

We all fall back on the bad habit of judging people based on the way they look or the title they have.

Remind yourself constantly that you never know who they are and what their story is until you reach out.  The person who might not be able to help you today might be the ideal contact down the line.

Question: What assumptions can you change to create different results?

One of my favorite musical memories was the night that we played the House of Blues on a Saturday night.  We were opening for one of our favorite bands (Spring Heeled Jack out of the East Coast) and we got to pretend we were true rockstars for the night.  Dressing rooms, backstage passes, and a refrigerator full of juice, water, and beer.  It was awesome!

And the reason we got that show at the House of Blues was because months earlier we had played a Wednesday night gig at the aforementioned Fireside Bowl for about 25 people (that is counting the members of the other bands).

We made friends that night with someone from another local group who would introduce me to a show promoter.  That show promoter would call me a few months later and say, “Hey, I need an opener for a gig this Saturday at the House of Blues, can you get me a demo tape, like, now.”  I was in my car two seconds later!

Too many people wait until they can see a very direct payoff to their networking.  That’s like waiting for a fireplace to give you light and heat before you give it wood.  The benefits of relationships, and the time you invest in them, are rarely immediate, linear, and obvious.

That doesn’t mean that there aren’t benefits.  When you are spreading around the networking karma, good things will come back to you.  The world is non-linear.  You can fight it or you can roll with it.

Question: Where are you waiting for an obvious return before acting?  And what would happen if you acted on faith that good things will come back to you if you put the energy in first?

5. Show your passion and engage others.

One of the most interesting gigs our band played was in Marengo, Illinois.  You haven’t heard of Marengo, Illinois?  That’s OK, I hadn’t either.  It’s basically a suburb of a suburb of Chicago.  But our saxophone player had grown up there, and still had ties to the music scene.  And that’s how Mike got a hold of us.

It’s been years, so I don’t remember exactly why Mike was so gung-ho about this idea.  But he really, really wanted to throw a show…in his garage.  He wanted us to “headline” a line-up of local bands.  And when he got in touch with me, I got swept up in his enthusiasm.  So even though we were playing bigger clubs at the time, we played his garage show for about 50 kids in a subdivision in the middle of nowhere, Illinois.

You can’t expect other people to be more excited than you are.  Whether you are networking for new clients, a new job, or new friends, you have to show some passion.  Be excited about what you are doing.  There’s always an aspect of sales to networking: you are selling yourself.  Have some product conviction and let your network know what you bring to the table.

Question: Does your network know why they should be excited about you?  Are you sharing the “special sauce” that makes up your unique value?

6. The sum is greater than the parts.

The last lesson I took from my music career wouldn’t be apparent to me until a few years down the line.  When talking to entrepreneurs and business owners, I would often hear sentences like, “Well, we just need to get more resources, and then we’ll be ready to grow” or “We’re looking for investors so that we can scale and then we’ll be successful.”

What strikes me looking back on the punks is that they didn’t wait for the right resources or situations or opportunities, they made them.

It doesn’t matter if you are trying to record a DIY album in your basement, build a business, or take your career to the next level.  Relationships are the key.  They are worth your time and attention. By working together with others, you can accomplish much more than you can on your own.  They say that a rising tide raises all ships.  By helping our networking partners, we help ourselves.  Our mission is to find the “scene” that we want to be in, and find a way to contribute to everyone’s success.

The Last (and Most Important) Question: Are you ready to invest in yourself by investing in your networking?