A few years ago, my girlfriend (now wife) woke me up on March 17th and wished me the top o’ the mornin’ by saying, “Happy St. Patrick’s Day, you sexy 25% Irishman.”

She was right about the sexy part, but I’m actually a little bit more than 25% Irish.

In true American style, I’m an ethnic mutt, with part of my father’s family here since before the American Revolution.  But my mom’s mom was from the Glynns of County Mayo, which is where the 25% comes from.  Part of my dad’s side might have a little Scotch-Irish in it, and we have an unknown lineage from my mom’s dad’s side that probably had a little more as well.  So I think that I’m really a 25%+ Irishman. 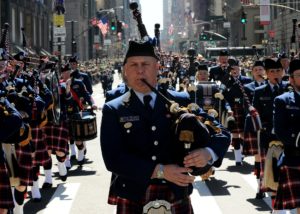 But genealogical jumping jacks aside, I think that the fact that I’m celebrating St. Paddy’s today as a partial Irishman is a wonderfully triumphant story.  The story of the Irish Diaspora (the dispersal of the Irish through emigration over the last 150 years) isn’t one of remaining cloistered and separate.  It’s the story of mixing and melting.  It’s about influencing our new homelands and being influenced right back.

Approximately 80 million people claim some Irish descent today.  Not bad for an island that in 2015 boasted a populations of only about 6.3 million, which is still below the pre-Famine levels in the early 1800’s.

It’s amazing to think that the original St. Patrick’s day parades were meant to bolster the spirits of the newly immigrated Irish in the second half of the 19th century.  Most of the recent arrivals were poor, uneducated, and trying to find work in a country full of “No Micks Wanted” signs.

But on St. Patrick’s day they could sing songs of celebration and loss.  And they could march past City Hall to remind the political elites that even though the Irish might not have gotten the respect they deserved when they arrived, their votes still counted.

And 100 years later an Irish Catholic president would sit in the White House. 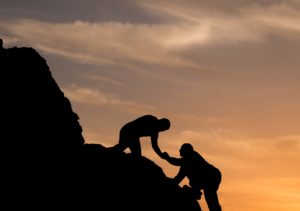 Today, when I think of those who came before me, I am thankful for their sacrifices.  The hardships that Irish-Americans endured in the beginning, from separation from their families and religious prejudice to “Paddy” jokes, have allowed me and my relatives and friends to enjoy a wonderful life.  And the Irish-American experience has been central to the American experience.  I’m proud of what we’ve done to build this country.  Whether it was the Trans-Continental railroad, profound artistic creation, or socially progressive legislation – we’ve had a hand in it.

I’m also reminded that the Irish have only been a “part” of it.  The wonderful mix that is the United States is still in the process of being mixed.  I listen to a lot of prejudice and anti-immigrant sentiment from those who claim Irish descent and I have to ask,

“The Know-Nothings in the 1800s spit the same venom at our ancestors.  Do you think that your great-grandmother was worthy of that?  Well, she was cleaning houses just like that woman from Guatemala or Nigeria.  Remember, that they will be someone’s grandma someday.”

Our job isn’t to get “in” and close the door, our job is to get in and extend a hand to the next person on the ladder.”

But that’s enough politics for today.  We’ll have to leave the rest for the pub after a few pints of Guinness (and for the record, green beer is an abomination that Miller and Budweiser have foisted on us in an attempt to be Irish – don’t drink it).

A Toast to You and Yours 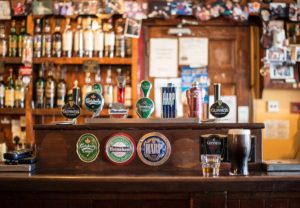 I’ll leave you with the toast that I gave at my Grandma Helen’s wake. And I hope that you have a chance to raise a glass to all of yours who aren’t with us anymore.

And toast to all of the new arrivals.  Whether you are new to this country or this planet, welcome!  When I first wrote this article my nephew, Conor Seamus McCormick had just arrived.  (If you couldn’t guess, he’s way more Irish than I am…).  And we have more little ones on the way.

Because that’s what St. Patrick’s Day is to me: a chance to remember where we’ve been and to recommit to the road ahead of us. 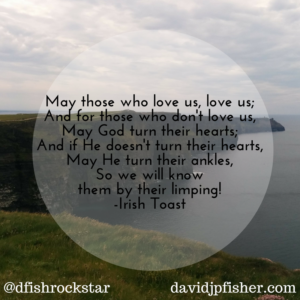