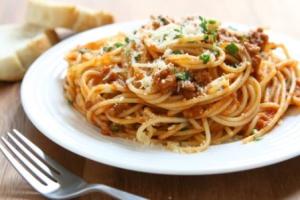 A few months ago, I went to a birthday dinner for a friend at an Italian restaurant in Chicago’s Lincoln Park neighborhood.  It was a fun night – great conversation, delicious food, and pretty tasty wine.  I’d never been to Saporia Trattoria before, but I had a good experience and I said to my girlfriend as we were leaving, “Hey, we should come back here sometime.”

Now, Chicago has a lot of great restaurants.  So even though we enjoyed ourselves, it wasn’t necessarily on the top of our list to get back.   But I had signed up for their mailing list when we were paying the bill (I get excited when small businesses do marketing right so it’s pretty easy to get me to opt-in).  I thought they might send out a coupon – and hey, who doesn’t like coupons?

A Touch of Personalization Goes a Long Way

Last week I did get a coupon from them.  And I’m definitely going back.  But not for the reason you think.

The coupon was OK; it was in line with what you might get from a site like Groupon or Restaurant.com.  But on the back of the envelope the head chef/owner had written a short note – one that probably took him 67 seconds for him (or someone) to write.  I actually timed myself writing it to see how long it took. 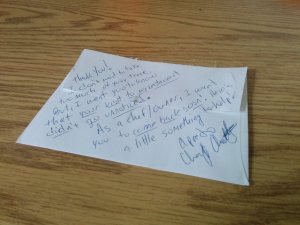 He thanked me for coming, and said that he hoped I’d return. It was a short note, and hastily scrawled (I still have no idea what his name is because I can’t read it). But it took the chances of a return visit from a “maybe” to a “the coupon is on the refrigerator and I’m already asking people to join us”.

This is partly because, as I mentioned, I love when small businesses do marketing right – and it was smart sending their marketing material to me, someone who is already a customer.  But more importantly, that note humanized the restaurant.  It went from a faceless entity to the undertaking of a specific person.  And that person reached out and created a connection – and then asked for the chance to serve me again.

The Power of Empathy

Human connections have power.  Chef Anthony made the effort to create a connection with me (I looked up his name on their website).  When I’m deciding what restaurant to go to, out of the thousands of options, the likelihood of me going to his restaurant has gone up quite a bit.

It doesn’t matter who your clients and customers are – they are all people.

I don’t think we did anything memorable as customers; so I don’t think this was a special letter just for me.  He probably has a server or sous chef scribbling these by the box load.  (In fact, he could even delegate this further by having the waitstaff write a note to each of their tables at the end of the night.)  But in taking that extra little step, he massively increased the value of his advertising dollar from his mailing.  For the $.50 cost of printing and a stamp, I can imagine a group of us going and spending at least $100 in his restaurant. There’s a good chance that without that note, the coupon would have gone in the drawer in my kitchen with every other restaurant mailing I get…

That’s a pretty incredible return for a few seconds of time.

It emphasizes to me the power of that human element.  That’s why networking and relationship building are so important.  It doesn’t matter who your clients and customers are – they are all people.  They make decisions based on the emotional connections they have.

Are you putting the time in to build that connection with the people you serve?

It only takes 67 seconds.

This article originally appeared on LinkedIn and went kind of viral. Check it out here!