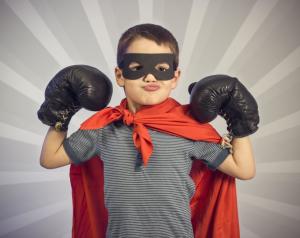 No matter how badly you want to, you can’t do anything you put your mind to.

It’s a dangerous myth that we often hear when we are children.  We are told constantly that “you can do anything you put your mind to” as the moral of the story in sitcoms and Saturday morning cartoons (remember the G.I Joe “knowing is half the battle?).

It’s dangerous because it’s untrue and it usually has the exact opposite effect that’s intended.  Before you get all huffy, know that I’m a huge proponent of personal growth and development; that’s why I know this idea isn’t true.

No matter what happens, I’m not going to be able to slam-dunk a basketball. I’m short, stocky, and have a vertical leap of maybe 6 inches (OK, maybe 4). And I won’t be become a master computer programmer (don’t have the attention span) or a lead singer in a band (passable voice at best).

The intention behind this lesson is a good one.  We try to inculcate a “can-do” mentality by telling ourselves and others that the sky is the limit – when the limit is usually a lot lower. We do this because we think that the only way to motivate people  is by promising them the sky.

It turns out to be counterproductive because people are smart; and when they realize that they can’t do everything they put their mind to, they stop trying putting their mind to anything. That’s horrible because it keeps them from achieving what is possible – which is often an extraordinary amount.

I’ve found that people often confuse ability and skill.  If we can “unconfuse” ourselves and the people we influence , we can open a new world of opportunities.

Your natural abilities are both an enabler and a limiter.

Our ability is inherent – we have all have different levels of ability in different areas; and there’s generally not much we can do about it.   Through an unknown (to me at least) mix of genetics, upbringing, and chance, we find ourselves having a natural aptitude for some areas while completely lacking in others.  Some of us even have massive natural ability in an area that leaves everyone else flabbergasted.  Michael Jordan flew through the air due to more than just eating Wheaties!

Your natural abilities are both an enabler and a limiter. Can we tweak our natural ability? Sure… a little.  But we are dealt a hand of cards that is relatively fixed.  You can rail against this, but it’s pretty pointless. As I said, I can’t slam-dunk and there’s nothing that will change that.

Skills, however, are what we learn over time.  If you think of ability as hardware, our skills are the software programs that we write. It’s what we learn from others through education. We develop them through practice and repetition.  Skills, unlike abilities, are much more responsive to the effort we put into them.  Sure, I might not be able to slam dunk – but I could practice free throws for an hour every day and improve my percentage.

So our goal shouldn’t be on achieving anything we want – we might not have the requisite abilities to get us there.  But if we understand that we can achieve a great deal by improving our skills, then there’s reason and incentive to put in the effort.

This article was first published on LinkedIn.com.  You can find it here!