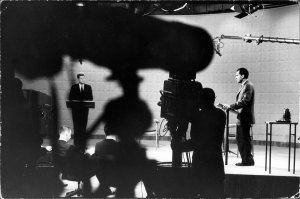 Let me set the stage.  It’s the fall of 1960; and for the first time in American history, two presidential candidates, Richard Nixon and John F. Kennedy, are going to debate each other publicly on this new-fangled invention – television.  Both are capable candidates and experienced politicians.  But that’s not what the electorate sees…and it became a deciding factor in the election.

Kennedy is widely regarded as having “won” the first debate.  Presenting himself as poised and confident, he had the aura of a confident movie star.  He had spent the previous days with his campaign team planning for the debate and rehearsing his responses.

Nixon had just come off a grueling campaign tour and had recently been in the hospital.  He came off as tired, pale, and disheveled.  He didn’t want to have any make-up, so when he started to sweat under the lights, he looked sweaty and just, well, bad.

Kennedy and his team had understood the power of the new medium.  The opportunity for the charismatic politician to communicate with so many people at once wasn’t to be underestimated, and they put the time into getting it right. While it wasn’t the only factor in Kennedy’s win, the debates influenced many of the American voters.  Considering the outcome was determined by less the 125,000 popular votes, it’s easy to see that a different outcome in the debate could have swung things in Nixon’s favor.

You might not be running for President of the United States, but my guess is that you have goals that you are trying to accomplish in your career.  As a professional you are trying to communicate with your audience, whether it’s your colleagues, your clients…or your potential clients.   Whether you like it or not, social media is the new media; it’s the way that we are going to communicate with each other moving forward.  And it’s going to continue to become more important.

I talk to many salespeople who don’t think that they have a social media problem because they can’t see it.  They don’t see the prospects going elsewhere after visiting a poorly-built LinkedIn profile or reading a great blog article from someone else.   Too many professionals pay lip service to building their social media competence and presence, but rarely take action because they are “too busy”, “compliance won’t let me”, or because “their clients aren’t online”.

They are happy to keep doing things the way they’ve always done them.  The only problem – they are going to wake up one morning (in the very near future) and they will have become irrelevant.

You have two paths to choose from.  You can be proactive and make sure that you communicate effectively with your prospects and clients online.  Or you can refuse to acknowledge the shifts in how we communicate and hope for the best.

Which side of history do you want to be on?

This article originally appeared at TheDigitalFA.com.