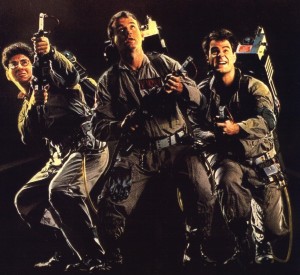 If you grew up in the 80’s, there’s a good chance that Harold Ramis movies were a constant source of amusement (and most of your clever one-liners with your friends). His passing this week has brought up fond memories for many of us, and though he brought us a lot of great material, Ghostbusters stands out as one of his funniest movies.

Why is such a memorable movie? It certainly isn’t the special effects. One of reasons might be the fact that each member of the group brought such a strong and unique personality to the team. Each of them played a very specific role; and when they played off of each other, hilarity ensued. They created a dynamic whole that just fit together.

You might not realize it because of the belly laughs, but Ghostbusters also shares a great entrepreneurial story. These guys were starting a new company capitalized on Ray’s triple-mortgaged boyhood home. Talk about pressure! Besides the fact that there was a spike in paranormal activity in New York, they succeeded because the mix of personalities supported the needs of the new organization.  And for a new start-up, it’s important to cover the entire spectrum.

Let’s look at the team:

Peter Venkman – “Twenty-four hours a day, seven days a week, no job is too big, no fee is too big.”

Peter became the de facto leader of the Ghostbusters. Although he seemed like a person who would run from anything that remotely resembled responsibility, he didn’t lack in confidence and vision.  He thought big and he pursued his visions (He didn’t take no for an answer either… he just kept after Dana even after she became the Gatekeeper).  He was even dreaming about the franchise opportunities before they opened the doors.

Just like he was the motivating influence in the group, you need to have a visionary. Someone has to see the finish line and continue to push the group towards that end goal.

Ray Stantz – “Wow. This place is great. When can we move in? You gotta try this pole. I’m gonna get my stuff. Hey. We should stay here. Tonight. Sleep here. You know, to try it out.”

Ray was the like puppy dog of the group.  Always enthusiastic, always ready to go, always ready to chase cars (he really loved Ecto-1).  He was the cheerleader of the group and the wellspring of their energy.  He had the forward momentum that Peter could harness and direct.

You can have the best plans in the world, but unless someone says, “This is a great idea! I’m excited about it!”, those plans will probably languish and remain unfulfilled. Enthusiasm is contagious, but it has to start somewhere.

Egon Spengler – “Try to imagine all life as you know it stopping instantaneously and every molecule in your body exploding at the speed of light.”

It’s easy to push the nerdy guy to the sidelines; but if there was no Egon, there would be no Ghostbusters.  He’s the inventor of all the equipment that they used, including the “unliscensed particle accelerators” they had strapped to their backs.  Egon was absolutely the brains behind the operation, and he gave them a foundation to work from.

Do you have the brains for your operation?  An important part of your value comes from the knowledge and experience that you can bring to new situations.  Without that, you can’t compete.

Winston Zeddemore – “Ah, if there’s a steady paycheck in it, I’ll believe anything you say.”

In the end, you have to get the work done.  And Winston was the workhorse of the group.  He showed up when the guys were overloaded…and just rolled up his sleeves and got things done.  He was the rock of the group, he didn’t have to come up with ideas or convince anybody of anything, he just had to execute.

It’s easy to overlook the importance of work when you are an entrepreneur.  There’s so much focus on the sexiness of the “next big idea” and the hustle that we forget that most success comes from simple hard work.

These four came together and created the best paranormal investigating company ever created. It would have never worked if there were four Venkmans or four Egons.  The mix is important.  Your job as an entrepreneur is to assemble this team. It might mean that you have to cover two, three, or even all four roles until you find the right people, and that can be challenging.  But when you find the right group, then you will be the logical answer to:

This first ran at Firmology.  Check out the full article here!