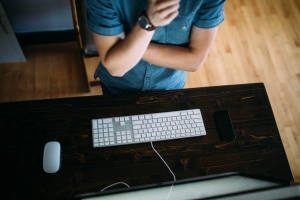 Over the last century (and decade), there has been an ever-growing number of communication tools available to us.  It used to be that the only way to talk to someone was to find them and actually speak to them (or maybe mail them a letter).  Now with the rush of new technologies, there’s a virtual buffet of options when you want to reach out to someone.

It’s important to remember, though, that not all forms of communication are created equal.  This is especially true in the business world, and even more critical when having a conversation where your goal is to influence someone else’s actions (for example, a sales call).  Business success is often based on relationships and relationship are based on communicating.  Don’t get trapped in using a communication method because it’s convenient – it might not be that effective.

Not All Communication is Created Equal

Here is a ranking of the different major communication tools that are available – from most effective to least effective.

There will be some variation based on circumstance, but it works as a general rule of thumb.   For example, it’s better when we can see the person we’re speaking to because a great deal of interpersonal communication is in our body language and facial expressions.  But if that’s not possible, it’s still better to at least hear the tone of their voice.

We all know someone who hides behind email at work – don’t be that person.

Is this list the last word in how you should communicate?  Absolutely not.  Does it mean that every time you want to effectively communicate with someone you need to speak to them face to face?  No way.

It does mean that you should carefully consider what method to use if you are going to have an important conversation.  Use the list as a guideline.  If you find that most of your interaction is towards the bottom, you might want to reassess how you choose to reach out to others.  By using the proper tools and technologies, you’ll find it’s much easier to communicate and influence others.

We all know someone who hides behind email at work – don’t be that person.